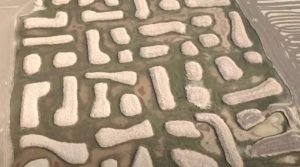 The water level in China’s Dongting Lake has fallen by 70 percent due to drought. In doing so, the drought has opened up a number of strange structures.

In Hunan Province , Dongting Lake is the second largest freshwater lake in China. Its area is 2800 square kilometers. Due to the months-long drought, the water level in the reservoir dropped by 70 percent, resulting in unusual structures on the surface.

The structures in question were described as “giant labyrinths” by one local Hu who captured the structure from above. Another local resident, Yang Xinwei, said there is no evidence that these patterns were created by humans. The blocks are the size of a football field.

According to a member of the East Dongting Lake Management Committee, archaeologists have never found ancient tombs in the area. Experts believe the mysterious symbols may have a connection to fishing.

The strange symbols may have been the result of the erection of small fences. It is likely that local fishermen built fish traps in the lake many years ago. When the water rose, the fish were driven into the enclosures, and when the water receded, the fish were trapped.

Depending on how much water from the Yangtze River enters or leaves the lake, the water level in it rises or falls. As a result, it is easier for fishermen to catch fish with this type of trap.

Some researchers believe that these “symbols” were made by long-vanished civilizations.

Others have suggested that the mysterious structures were the foundations of ancient structures. Others believe that extraterrestrial civilizations had a hand in creating strange symbols of symbols.