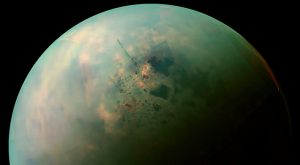 According to preliminary calculations, the lander with drones will reach the target by 2039. Scientists plan to send a whole army of drones to explore the polar regions of Titan.

In addition, they must collect atmospheric and geological data, as well as reveal traces of possible life on the satellite.

First of all, scientists plan to find out how seasonal changes in the atmosphere occur. This can be found out due to the fact that the main part of the apparatus will rotate around Titan.

The collected data will be transmitted to Earth. It should be noted that Titan is one of the largest moons of Saturn. It has seas and oceans, atmosphere and precipitation. But observation of Titan from Earth is almost impossible due to the high density of the atmosphere.

Whether there is life on Titan, the largest moon of Saturn is at present an open question and a topic of scientific assessment and research.

Titan is far colder than Earth, but of all the places in the solar system, Titan is the only place besides Earth known to have liquids in the form of rivers, lakes and seas on its surface. Its thick atmosphere is chemically active and rich in carbon compounds.

It is likely that there is a layer of liquid water under its ice shell; some scientists speculate that these liquid mixes may provide pre-biotic chemistry for living cells different from those on Earth.