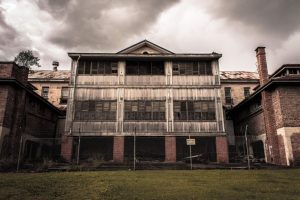 There are a number of places around the world where atrocities so heinous have been committed that today they are even referred to as holocausts, but none are quite so horrifying as those that involved children.

This is one such place, an unassuming abandoned building that if you didn’t know the history you would think was just a school. It doesn’t have the Gothic architecture of Beelitz or the imposing stature of Ararat, but the events here both past and present are far more terrifying. Welcome to the Dorea Insane Asylum…

Dorea Insane Asylum is a product of gross corruption and a system gone rogue. In the 1940s through to the 1960s, Quebec Premier, Maurice Duplessis, entered into a very shady deal with the Roman Catholic Church in which they would obtain federal funding for children’s “asylums”, but these asylums were in fact just ordinary orphanages.

You see the orphanages were overseen by the church and as such received separate funding, but as an asylum they would receive greater funding from the Canadian government. Upon the launch of their scheme thousands of children were suddenly declared mentally unfit. To this day the survivors of the scheme are known as the Duplessis Orphans.

While none of the Duplessis Orphans had it good, the children at Dorea Insane Asylum would endure something far worse. In their case the facility was operated by Donald Ewen Cameron, an American living across the border in Virginia.

Doctor Cameron wasn’t just a psychiatrist, he was also one of the lead researchers in the CIA’s MKULTRA mind control program. He also held positions as the President of the Canadian, American and World Psychiatric Associations, the American Psycho-pathological Association and the Society of Biological Psychiatry.

Despite all that, he was highly criticized for using treatment without patient consent that included disproportionately-intense electroshock therapy and experimental drugs, including LSD. Simply put, Dr. Donald Ewen Cameron was a monster.

What could possibly be worse than giving a monster of Dr. Cameron’s magnitude such a high level of authority, giving him an entire facility in the middle of nowhere filled with children that nobody cares about?

Dorea Insane Asylum under the care of Dr. Donald Ewen Cameron was so removed from any governing body that to this day we have no idea how many children were tortured and died at his hands. The bodies of the dead were never disclosed, but instead were buried in unmarked graves throughout the property.

Today Dorea Insane Asylum is a vacant unassuming building off the back roads of Franklin Quebec not more than 600 feet from the American border. Since its closure it has become a favorite destination of urban explorers. Most of these enthusiasts tour the main building and so there are very few reports of supernatural activity, but that’s not where the tortures and killing took place.

In the mid-1990s a small group of urban explorers discovered something terrifying: a 400 foot long subterranean passage way that led from the main building to a series of smaller buildings.

They followed the passage way and gained access to two of these buildings where they found Dr. Cameron’s torture rooms as well as what could only be described as cages for his test subjects. They weren’t there long before the entities arrived.

If you’re in these smaller buildings you’ll know they’re there when the temperature drops by ten degrees in seconds. Witnesses have heard what they described as a constant chattering and whispering sound.

To date nobody has reported objects moving or actually seeing the entities, but many have reported the feeling of things brushing up against them on all sides at about the height of a child’s shoulders. Whether you see them or not, the child victims of Dorea Insane Asylum are all around you.

Lost City of the Arctic Circle: Someone Lived There