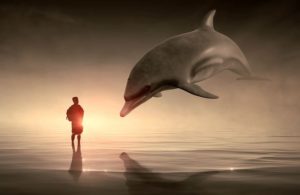 Why do scientists strive to learn the language of animals? It is not a matter of communication. Primarily, they want to understand nonhuman logic and use it for deciphering messages from extraterrestrials, reports pravdareport.com.

Let us assume that scientists get an encoded message from aliens. The message needs to be decoded or at least singled out from a cacophony of space signals.

Lawrence Doyle, a researcher at the Search for Extraterrestrial Intelligence Institute in Mountain View, California, came up with a way to find evidence of extraterrestrial origins in the language of dolphins.

Doyle and a team of specialists from the University of California used communications methods based on a mathematical technique for analyzing any sequence of symbols e.g. series of DNA units, figures, letters or phrases.

First and foremost, it is necessary to be sure that a signal really contains some sort of information. George Zipf, a linguist at Harvard University, devised a method for counting different letters in a typical English text.

The linguist counted the number of different letters occurrence in a typical English text. Then he drew a chart for the occurrence frequency of letters in a given order and on a logarithmic scale.

At the same time, a random combination of letters devoid of information did not have any slant at all. In other words, a meaningless bunch of words will amount to zero on the chart if filtered through the mathematical formulas.

The “chatter” of the monkeys turned out much more primitive. Therefore, dolphins are closer to humans in terms of intelligence, according to the researchers. Now they need to understand what the “whistlers” are trying to say to humans.

Dolphins have long become an inspiration for numerous authors of most kooky theories. One of the latest theories was put forward by Simon Clark, an astronomer at the Kennedy Space Center.

He maintains that dolphins are indigenous to one of the moons of Jupiter. “Next to humans, dolphins could be the most intelligent creatures in our solar system so forget ‘the little green men,” said Cark at a press conference in Florida this January.

NASA’s Galileo noticed some movement under a thick ice layer of Europa, the Jovian moon, while flying past it at an altitude of 400 kilometers several years ago. The probe’s sound sensors reportedly detected a whistle coming right out of the ice cover.

Until recently NASA has kept all data pertaining to the Galileo Interstellar Mission under wraps. The details of the findings are still coming through.

“Scientists were just amazed at the results of a computer analysis of the data. The frequency of the sounds coming from the moon’s ocean was found to be equal to that of the sounds produced by dolphins on Earth! The error margin is 0.001%,” said Clark.

At the moment it is impossible to identify the life forms “communicating” with one another in the oceans of Europa. However, a fresh theory says they could be similar to common dolphins.

Are dolphins and humans the most intelligent creatures in the Universe? We put the question to Vladislava Tarchevskaya, a researcher at the Laboratory of Bioacoustics, she has been studying issues relating to dolphins’ sound communication for many years.

“They might as well be the smartest ones,” Tarchevskaya said. “The creatures have enormous capabilities. The frequencies range they use is a lot wider than that used by humans. The range of our sound communication normally stays within a frequency band of 20 kilohertz (musicians can tell sounds ranging up to 40 kilohertz).

“And dolphins use an “extended” frequency range going up to 300 kilohertz. Moreover, our research shows that dolphins have approximately the same number of levels with respect to the sound organization i.e. six. The number breaks down as follows: sound, syllable, word, phrase, paragraph, context.

“Humans can tell the meaning starting from a third level (word) and upward. We don’t know yet where it starts in the case of dolphins. Meanwhile, both for humans and dolphins the sound organization is nearly the same in terms of complexity.

“On the whole, there are lots of noticeable parallels between the two species: Homo Sapiens and Orcinus Orca. Not unlike humans, dolphins can eat any creature while no animal dare attack them.

“The span of dolphin life resembles an average human lifespan. Dolphins reach maturity at the same age as humans do, they are very sociable, live in families. They even have dialects, something that is akin to our languages.”

Can’t Recall Your Dreams? What It Means And What To Do About It