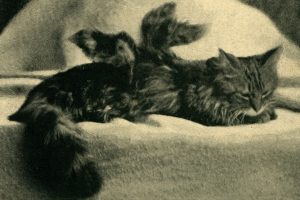 Throughout the years, there have been reports of winged cats supported by the animal itself, pictures and veterinary examinations. They do exist, but, what are they?

Winged cats have been studied. Out of about 138 sightings, 28 of them have been scientifically documented. Living cats and the bodies of dead ones have been examined.

Douglas Shelton, fifteen years old, captured a cat while he was hunting in Pinesville, WV in 1959. The cat was not feral, but acted friendly. And, it had wings! The only time the cat got angry was when the wings were pulled. The cat was named Thomas.

The name was not changed although it was later discovered he was a she. The cat looked like a longhaired Persian, was larger than the average-sized cat and the tail was bushy. The two wings were about nine inches long, felt like they had gristle in them and were shaped perfectly.

An anonymous veterinarian examined Thomas. At first, he thought the wings were a freak of nature, like extra legs, but after he examined the cat, he was not sure what they were.

Thomas became a sensation. She appeared on The Today Show. Jack Lescoulie was acting MC. Thomas appeared to be bored. Douglas said he had been offered as much as $400 for her, but she was not for sale.

Pinesville had a feline celebrity and the Sheldons realized she could be a money maker. Douglas charged people a dime to look at her. Reporters were charged a fee if they wanted to take photographs.

The publicity attracted the attention of Mrs. Charles Hicks. She said Thomas belonged to her and she wanted her back. A friend gave her the cat she named Mitzi. People she knew could verify that she owned Thomas because they saw the wings.

Thomas went to court on October 5, 1959 as Exhibit A in the custody case accompanied by Exhibit B, a small box. People were shocked to see Thomas no longer had wings. What was left of them were two large fur balls in the box. They were shed in July.

Huge mats of hair are the most common cause of wings. Longhaired cats account of many of the reports of winged ones although there are short haired ones. Molted hair can adhere to the new hair and there can be several layers of molts.

Deformities a cat is born with, such as extra legs, can appear to be wings. There is a kitten’s stuffed body that shows it has extra forelegs that are in a wing-like position. Cases of these cats surviving have been reported. 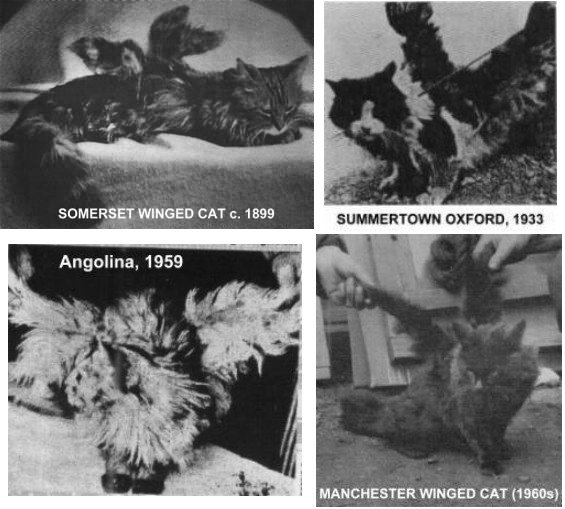 There is an uncommon deformity, feline cutaneous asthenia, FCA, in which the cat’s skin grows into heavy folds on its back or shoulders. Similar deformities have been scientifically observed in horses, sheep, cattle, minks, dogs and even humans.

When cats have FCA, the flaps become fur covered and appear as wings.

Cats cannot flap their “wings” and have little to zero control over them. Although the first cases of winged cats were reported in the 1800s, FCA was not discovered until the 1970s.

It was in the 1990s that cryptozoologists and veterinarians realized that FCA explained some cases of winged cats. It was Karl Shuker, a cryptozoologist who was interested in medical anomalies and freaks of nature, who made the connection.