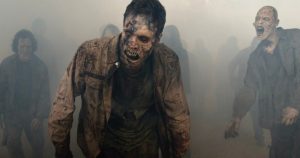 Although there are tales about zombies from around the world, they mostly come from Haiti.

The walking dead. Thinking of zombies conjures up images of dead people walking slowly with their arms outstretched, eyes glazed over, with rotting flesh falling off of the body. These dead people brought back to life have terrified audiences in numerous zombie movies.

How accurate is this depiction of zombies? Are they really mindless, expressionless corpses that attack people and try to eat them?

What Is A Zombie?

It is best to first establish what a zombie truly is. There are a couple of theories regarding this. One is that some people who appear to exhibit some zombie like mannerisms are actually people suffering from mental illness who are used as slaves in Haiti.

Another theory is that they are made by bokors. A bokor is a Voodoo priest. It is believed that a bokor makes a special poison that when absorbed into the victim’s skin, causes a person to weaken and appear dead.

Scientist Wade Davis believes that a poison from the puffer fish, known as tetrodotoxin is a key ingredient in this poison. Once the body is buried, the bokor digs it up and gives it a chemical paste which keeps the victim in a trance like state. The victim can now become slave labor for the bokor.

Clairvius Narcisse came from the village of L’ Estere. Although in excellent health, one day in 1962, he suddenly “died.” Although he couldn’t move, he was completely aware of everything around him including the sound of dirt that was falling on his coffin.

For the next two years, Narcisse was kept drugged and used as a slave worker with about 100 other zombies. One day, the overseer forgot to administer the drugs which kept these zombies in a trance like state and several of them regained their minds, killed the overseer and escaped. Narcisse was lucky to make a full recovery of his mind.

Felicia Felix-Mentor was not so lucky. Twenty-nine years after her death, she was found walking around naked. She had lost all ability to speak and appeared incapable of any kind intelligible thought. Unfortunately, for Felix-Mentor, her time spent as a zombie caused irreversible damage.

How to Avoid Becoming a Zombie

Family members will go to great lengths to prevent the body of a loved one from becoming a zombie. Families that have money will bury the body under a stone slab so the body can’t be removed. In other cases, families take turns watching over the grave for 36 hours. After that, the body cannot be removed.

Other times, the corpse is killed again to make sure it is really dead. There have also been occasions when a family member is buried with a knife so the person can defend himself should he still be alive when his body is exhumed.

So, are zombie’s real? In terms of real dead bodies coming back to life, no. However, with the use of poisonous drugs, people can be put in a zombie-like trance state.

Death: Can Our Final Moment Be Euphoric?

Nancy Kerlin Barnett’s Grave In The Middle Of The Road