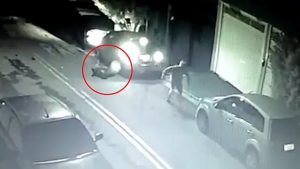 The local Christian pastor and his family were sitting in their car parked at the curb when three men approached the car to take money from the driver.

Two robbers surrounded the car so that the driver did not go, and the third one pulled the door open and… immediately fell dead on the asphalt with a bag.

The first accomplice rushed in panic and ran away, leaving his dead friend at the crime scene. But then he came back and even tried to pull him away.

However, at this moment the pastor and his wife got out of the car and then the robber took the bag from the dead man and ran away. The second robber also disappeared from the scene.

Later it turned out that the deceased robber grabbed an instant myocardial infarction (heart attack) and died in seconds.

Local journalists called the incident a real divine intervention. The pastor himself also called it a miracle.

At the moment, the police are looking for two escaped accomplices.