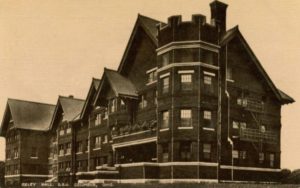 According to Ohio State University staff and students there is something that stalks the corridors of Oxley Hall at Christmas time and, to quote Shirley Jackson, “what ever walks there, walks alone.”

Actually, what ever walks there probably walks alongside Department of International Affairs faculty, students, staff and a handful of TAs, but given the current state of the world who could blame those people for not noticing.

While OSU has admitted female students since it’s 1870 inception, it wasn’t until the early 1900’s that alumni Florence Kenyon Hayden was chosen to design the women’s residence hall, naming it after the mother of OSU’s then president, William Oxley Thompson.

At first sisterhood in the Hall was tighter than a pair of traveling pants, until sometime in the 1930s when a terrible incident occurred that would pop the button and bust the zipper on everyone’s good time.

While no one seems to know the exact year (according to my sources OSU only began keeping campus death records in the early 1980s), it was during winter break in the 1930s that one female student was left alone in the Hall.

Who she was, why she stayed behind and exactly how she died is up for conjecture. Three things that remain consistent in her tale are that her death was violent, that it happened on the 3rd floor and that it took place on December 17th.

By many accounts she hung herself or slit her wrists in the bathtub. Others say she was killed when she surprised a burglar expecting an empty dorm. Either way, MANY have witnessed her presence. University legend even states the ghost is the reason the building is no longer used as a place of residence.

After hearing their daughters tales of terror, so many parents refused to let their children stay there that it was turned over to the University Research Foundation in 1967, eventually housing International Affairs in 1991.

So what does our mystery girl ghost of Oxley Hall get up to?

For many years she has been known to turn lights on and off, unlock and open doors and has been heard walking and talking throughout the building. Many swear that if you go past Oxley Hall late at night during winter break (like right now) you will see a light on in one of the third floor rooms and might even hear her screams.

But this poor girl ghost doesn’t appear constrained to one building, nor is she the only one to haunt Oxley Hall.

A particularly disturbing incident occurred during Christmas break of 1980, as told to The Lantern in it’s October 30th, 1986 issue by Randy Gebhardt, then security manager for OSU’s South Residence Halls.

Gebhardt tells the story of a female security guard that was standing outside Mack Hall, which adjoins Oxley, when she had an overwhelming sensation of being watched. She turned just in time to see one of the dorm doors slam shut on a balcony. After calling Gebhardt for backup, the security gaurds began a search of the building with the dorm director in tow.

“We went to the balcony (where the door had slammed shut) and started seeing tinsel lying on the floor leading out of a dorm room,” said Gebhardt.

As they entered the room to investigate, the dorm director immediately noticed that the Christmas Tree was missing. Following the tinsel only offered more questions as the trail stopped cold in the middle of a hallway with no more tinsel nor any sign of the tree.

Was it the ghost or the grinch? And why would our ghost be haunting Mack Hall instead of Oxley Hall, where she supposedly died?That brings us to another unsubstantiated rumor of horror from years gone by.

You see, aside from the story of Oxley being converted into an administrative building because of it’s hauntings there is another tale…one where 3 students from Mack Hall sneak into Oxley Hall and fulfill a suicide pact during the 1960s.

In those days there was no easier way to sneak from one building to the other than the access tunnels that connect each Hall’s basement.

These tunnels have been a constant source of unexplained happenings, as well. While making their rounds, security guards have found doors they have personally locked propped wide open and heard mysterious noises coming from the empty tunnels.

When Gebhardt took the manager of the Office of Visitor and Community Relations to investigate the tunnel they only made it 50 feet in before the power went out. Never out of eyesight from the tunnel entrance, they were shocked to discover the light switch had simply turned itself to the “off” position when they emerged.

And what’s a haunted building without a spooky attic?

Aside from eerie sensations and a few sightings of an elderly gentleman wandering the building’s garret, several EMS workers got the fright of their life while they were doing a maintenance check of the fire prevention systems one night in the early 1990s.

The workers were suddenly startled when the alarms started sounding throughout the floor, followed by a strong gust of cold air that caused the lighting fixtures to begin swinging violently in the completely sealed attic. The EMS workers reportedly fled for their lives.

Unlike the shades on other floors of Oxley Hall, the beelzebub of the belfry is thought to be an individual known to history: son of the building’s namesake and the fifth president of OSU, William Oxley Thompson.

So it seems every nook and cranny of Oxley Hall is haunted. Whether it is the ghost of a long dead student or president or something else that haunts the former dormitory, one thing is for certain: the Christmas period is its favorite time of year.

In fact, it is, according to ancient wisdom, the most wonderful time of the year for not just Santa Claus and his merry elves and reindeer but also every devil, ghost and goblin that haunts the world!