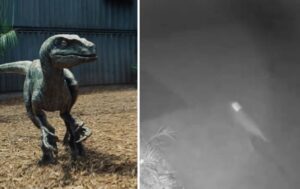 Recently, residents of the state of Florida (USA) were surprised by a video (see below) taken by a surveillance camera installed in the backyard of a local woman.

Christina Ryan was looking through the recordings made at night, and suddenly saw an unidentified creature on them, which very quickly ran past the camera.

The creature looked and moved very much like a typical bipedal dinosaur such as the Velociraptor, small in size.

Speaking to Fox 35 News, Ryan said: “Any animal we can come up with that would be ‘walking’ at 3:40 in the morning, wouldn’t walk this way.

“Maybe I’ve watched ‘Jurassic Park’ too many times, but I see a raptor or other small dinosaur!”

She says that everyone she’s shown the clip to has come to the same conclusion.

Ryan added: “Some say a large bird, but that makes no sense – since whatever it is appears to have front legs. So not sure? Lol. I’m sticking with raptor myself.”

The six-second video showcases a creature quickly running through Ryan’s yard. While Ryan’s words sound unusual, the creature does have a velociraptor-like build – long tail, hunched shoulders, and all.

After the strange footage was shared online by Fox35 News, many social media users have been left scratching their heads – although some people have their theories.

While some agreed that it did look like a velociraptor, some suggested it may have been a ‘peacock’, a ‘dog with a costume on’, an ‘animal with a bucket stuck on its head’, a ‘gator’, an ’emu’ or a ‘sandhill crane’.