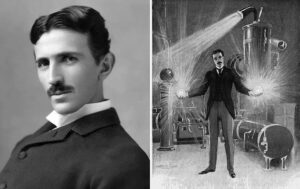 Nikola Tesla was undoubtedly one of the brightest minds of the 20th century. Many of our modern day commodities owe their existence to his brilliant mind. However, he lived most of his life in a constant battle with the energy brokers of his day, namely Thomas Edison backed by General Electric.

On January 7, 1943, Tesla died alone and impoverished in room 3327 of the New Yorker Hotel. Two days after his death, the FBI ordered that all of his belongings be seized.

His lifetime work was confiscated by the Office of Alien Property even though he had been an American citizen for 52 years. It was known at the time that Tesla had been working on several important projects, including wireless communications and limitless free energy.

Tesla’s plan was to harness energy from the radiation present in the universe, using the entire planet as a conductor. This would have meant that anybody could have free electricity simply by sticking a metal rod into the ground.

These notions did not go well with the power elite, whose interest was maintaining the status quo, that is keeping their multi-billion dollar businesses running.

After all, what good was free energy if they wouldn’t be able to meter and control it? Therefore, many speculate that the U.S. government acted according to the pressure exerted by these big corporations. They eventually shipped his estate to Belgrade, Yugoslavia but not before taking nine years to go through it.

This situation gave rise to a pervasive notion that is strongly supported by circumstantial evidence: Tesla’s research was considered critical, even dangerous and was confiscated for good measure.

His ideas could have constituted an important advancement for humanity and that’s exactly why they were withheld.

It is believed that the technology behind HAARP is based on Tesla’s research. The U.S. has many top-secret compounds around the world and also has a history of secretly developing technology.

Perhaps this is why Tesla’s papers were seized but we might never know for sure.

After years of fielding questions about possible cover-ups, the FBI finally declassified some 250 pages of Tesla-related documents under the Freedom of Information Act in 2016. The bureau followed up with two additional releases, the latest in March 2018.

But even with the publication of these documents, many questions still remain unanswered—and some of Tesla’s files are still missing.

Shortly after an electrical engineer, Dr. John G. Trump (yes it is current President Donal Trump’s uncle) was assigned to review his papers to discover if any of it was of actual tangible value.

He determined that it was “primarily of a speculative, philosophical and promotional character” and said the papers did “not include new sound, workable principles or methods for realizing such results.”

Tesla’s extended family, including his nephew Sava Kosanovic, tried desperately to have at least his personal effects returned. Their requests were eventually accepted and some of his personal items were returned to the family.

Recently declassified documents reveal that the FBI, at the time, were concerned with his nephew’s intentions. They had even considered arresting him to prevent Tesla’s work falling into enemy hands.

After a long court battle, Kosanovic, the rightful heir to his uncle’s belongings, was finally given them. Tesla’s possessions and files were sent to Belgrade.

But, interestingly, of the 80 trunks or so of Tesla’s effects, only 60 arrived in Belgrade. Whether the U.S. Government had kept some of the information and effects or not is still, today, unknown.

It is also believed that Ronald Reagan’s “Star Wars” Strategic Defense Initiative program in the 1980s was probably inspired by Tesla’s “Death Ray”. But if the government is still using some of Tesla’s material for its Research and Development, this would explain why some, if any, of his original works, are still missing today.

Of course, we will never know for sure.

Scientists to invent time machine in near future?