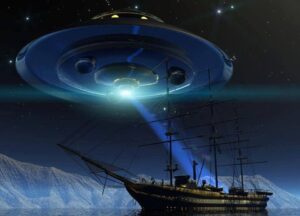 It is 2 a.m. on October 12, 1492. Christopher Columbus and his crew have just spotted the shores of San Salvador, marking the end of a 70-day transatlantic voyage.

They found the Caribbean. But just four hours earlier, a different, far more unusual sighting had occurred, leading to an odd question: was the discovery of America overseen by a UFO?

According to ufoholic.com, Numerous researchers are convinced that extraterrestrial beings have always been tracking our progress as a species.

Supporting this theory is the fact that, ever since mankind started keeping records, UFOs have been a regular mention.

Signs of their passage can be found across the globe, from 10,000 year-old cave paintings in India to the writings of ancient Greek an Roman historians, and even in medieval works of art. If history took the time to remember them, they must have been a presence.

The last place you would expect to find mentions of one such extraterrestrial craft is Christopher Columbus’ Journal. In fact, his family regarded the event as a significant one and it was mentioned several times in his heirs’ writings.

The strange series of events begins to unfold on September 13, when Columbus and the three ships under his command were in the area now known as the Bermuda Triangle.

The Admiral observed that the needle of his compass started behaving erratically, and was no longer pointing to the North Star. The incident repeated itself on the 17th and 20th. Columbus wrote in his journal:

“The pilots observed the north point, and found that the needles turned a full point to the west of north. So the mariners were alarmed and dejected, and did not give their reason.

“But the Admiral knew, and ordered that the north should be again observed at dawn. They then found that the needles were true. The cause was that the bright star makes the movement, and not the needles.”

“This mention of a bright star performing movements on the night sky is unusual by itself, but when combined with the events that followed, it paints an unorthodox picture.”

As Columbus would later reveal to his close ones, the bright star was seen on other nights as well, leading both him and his men to suspect they were being followed by something supernatural. Sailors were far more superstitious five centuries ago than they are now, so you can imagine how disquieting the sighting must have been.

At 10 p.m. on October 11, Columbus was patrolling the deck of the Santa Maria. The morale of his crew was low and the homesick men had already threatened to turn around and sail back to Spain. While pondering on which course of action to follow, the strangest occurrence interrupted his train of thought.

“The Admiral, at ten o’clock, being on the deck, saw a light glimmering at a great distance, though it was so uncertain that he could not affirm whether it was touching down or not.

“He called Pedro Gutierrez, a gentleman of the King’s bed-chamber, and said that there seemed to be a light, and that he should look at it.[…] He did so, and saw it.”

During that night, the light disappeared and reappeared several times, while changing its altitude “in sudden and passing gleams.”

According to other sources, the light was initially spotted beneath the waves and later ascended into the sky. Ufologists have drawn a conclusion long before us; they believe Christopher Columbus encountered a UFO/USO during his first voyage.

The historical importance of his journey has given rise to the suspicion that Columbus’ expedition was closely monitored by an extraterrestrial craft piloted by a crew whose motives remain unknown. Also, the timing of the sighting is further proof the aliens were well aware of Columbus’ plan and difficulties.

This is a challenging theory, one that skeptics would have a hard time agreeing with. But the vast number of sightings and evidence spanning thousands of years are a clear indicator that sometimes, the most rational explanation doesn’t fit.