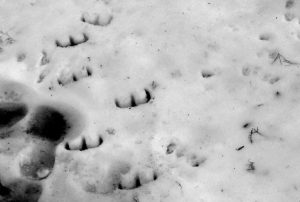 A mysterious entity ran amok between midnight and 6 AM when Devon villagers saw the tracks in February 1885. They called them the devil’s footprints.

What caused the Devon prints is still an enigma. The snow fell heavily through that 1885 night, covering Southern Devon. It was thought the white invasion stopped around midnight.

The footprints stretched 100 miles from Exmouth to Teignmouth. Years later, strange footprints in the snow were found in Woolsery garden Powler’s Piece forest. What might they be?

The inhabitants saw strange tracks in the snow. They were shaped almost like horseshoes. The innumerable prints covered miles of land. They went over the tops of roofs and through walls.

The strange hoof prints stopped at the Exe River, then appeared on the other side as if their originator leapt over the water or walked on it. 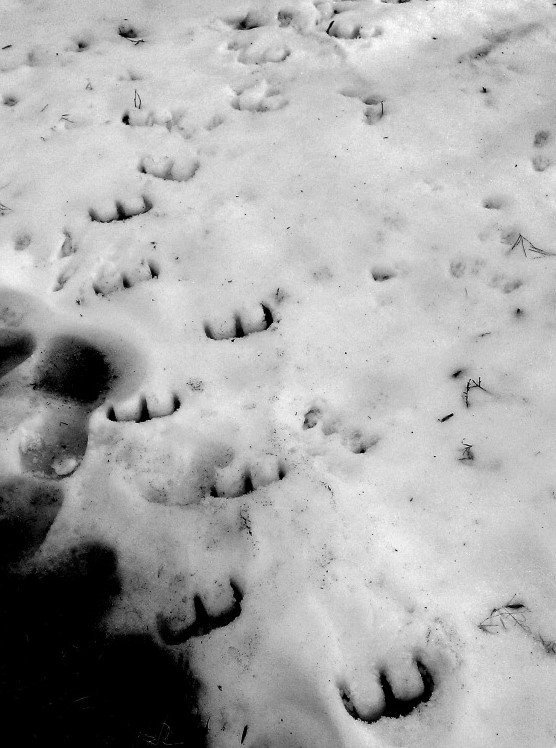 Some stopped, then appeared to leap on the ground. Other tracks seemed to travel through narrow openings, while still others stopped at 14 feet walls, then appeared to hop to the other side or walk through the barrier.

A curious naturalist measured the distance between them and discovered it was a constant eight and a half inches. It looked like the creature or creatures walked like bipeds, not four-legged ones.

The locals kept watch to see if the hoof prints would return. They didn’t. Some of the braver citizens, armed with guns and pitchforks searched for the unknown creature that made its presence known. Others locked themselves in their homes after dark.

Word spread and the press publicized the strange event. Scientists, the clergy and laypeople had their own thoughts about what made the prints. Some members of the clergy preached that the devil made the prints while he was searching for sinners. Other clergymen debunked this as superstition. One sermonized that the cause was cats leaving their paw prints.

The newspapers discovered that some kangaroos escaped from a private zoo. There were those who thought the fugitive marsupials made the mystery tracks, although they did not look like kangaroo paw prints.

A prominent biologist proclaimed that badgers looking for food were responsible for the phenomenon. He further explained that the tracks looked weird because they thawed, then froze. Other animals including swans, raccoons, otters and rats, were blamed.

A writer speculated that the hoof prints were made by two or more unknown creatures that traveled in a way as to make their paths look like one long one.

Other theories were that a hot air balloon was trailing a rope that made the tracks or it was unusual atmospheric conditions. Or it could have been an alien life form. There was no indication of a spacecraft having landed or being sighted.

Ralph of Coggeshall, a thirteenth century English author recorded that, in the early 1200s, there was a very violent lightning and thunder storm. Hoof prints of an unknown creature appeared after the storm ended.

They were still visible in the soft ground several weeks later. Speculation is that these prints were caused by unknown natural phenomena; however, this happened only once.

In investigating the paranormal, human fraud has to be taken into account. It would have been impossible for a prankster to create the prints because of the way they tracked and the amount of them.

The case of the devil’s footprints remains an intriguing mystery.

Halloween: The Origin and Where Does It Come From?