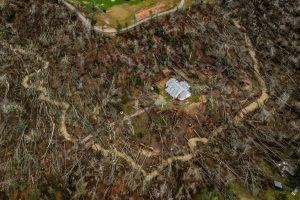 A drone captured a small house, which somehow miraculously survived after a devastating tornado. All the trees around the house were uprooted, but the house was completely unaffected.

March 3 in the states of Alabama and Georgia was a devastating tornado. On March 4, Matt Gillespie came to visit his parents in the town of Ellersi (Georgia) and launched the drone to capture the effects of the destruction of the hurricane in Ellersi and the nearby town of Waverly Hall.

But when Matt was looking through the recording, in one place he saw an absolutely incredible picture. In the midst of fallen and torn trees, there was a small white house and it was not touched by a tornado at all. Like a tornado, having reached this house, purposely “walked around it”.

The house was in the middle of the forest and all the trees around it were torn out or broken.

Later, Matt found out that the residents of this house also did not suffer.

“I don’t know how many houses were damaged in total, but 8 houses met in the tornado’s way and all of them were destroyed except one. My parents survived the hurricane and my father said that he had never been so scared, “- said Gillespie in an interview.

In Alabama, a tornado killed 23 people, including ten from the same family.