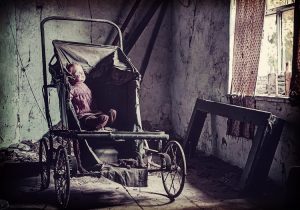 Anomalien.com reader Paul W. shares his story about an encounter with the unexplainable.

My story begins, as stories often do, with me doing a fairly common activity with no unusual occurrences. I was helping a friend of mine renovate a building in Stafford, Virginia for their workplace.

This building used to be an old abattoir (an abattoir is a slaughterhouse, in this case, it was specifically used for trafficking human parts for black market medical usage before the government capped them).

This building had not been an actual residential house since the early 1900s, and soon became an abattoir during World War I, and was shut down shortly after World War II. There were a few of us working on the building, one fellow who spoke only Russian and his friend who translated to me what he wanted me to do.

He jokingly told us that the building was “linked to different worlds”. I asked him by what he meant and he said, “you’ll see… either you’ll go home or you’re a moron.”

I began to strip the paint off the steps to the upstairs when I thought I heard someone whispering my name. I asked the crew if my name was being called but they insisted it was not. The whispering persisted to the point where I went upstairs to investigate.

My crew wasn’t much for playing pranks on one another in this line of work, so I found it quite odd. No one was upstairs, but I found tremendous difficulty getting back downstairs. Now, the layout of the house was not complicated in any way, yet it was almost as if I was in a different building.

I would go down a hallway I thought brought me to the stairs but I’d end up in a bathroom. Then when I went back later, I’d try to go to the bathroom and end up in the closet. It was seriously almost as if I was in an entirely different building each time.

I continued my work on stripping paint, until I almost cleared the top step, when I heard an ear-piercing scream come from another worker. As we all rushed to him to see what had happened (we presumed he injured himself while working) he was crouching in the corner crying. Now this man was by definition, a ‘hard-ass’.

Meaning your usual pranks and boo’s will not affect him beyond irritation and getting pissed. He was terrified beyond belief. When we asked him what had happened, he said “it tried to touch me”. He would not tell us what.

It was at this point, the haunted began to turn progressively worse. One other worker can confirm because a similar thing happened to him as well. Now, I had been in the majority of the rooms in the house, so I was aware of what they looked like.

I walked into one of the bedrooms, and the room was not at all what it once was. There were trays of tools on the tables, blood everywhere, and a girl was laying on the bed, cut open and dying. I ran out of the room as fast as I could and got several other people to come back up and look, and when we returned it looked like a normal dusty bedroom.

This occurrence happened in several spots around the house. It was almost as if it was trying to force what had happened in the house, back into a reality, but it just remained a faded image of the past.

Several workers claimed to have seen a man walking around the house, who was not a member of their team. He was said to be wearing a white apron, black military-style boots, and a black German gas mask (which was issued at that time to prevent breathing in any germs or contracting illness).

People claimed to have seen him walk into rooms, then when they’ve opened the door, the room was empty. They have claimed to also hear very loud screaming and yelling in German at random times during the day and night.

We eventually had to stop work on the house, due to several severe injuries. A man was in the basement trying to fix the boiler, when somebody came up behind him and beat him repeatedly with a crowbar, he claims.

He said he did not get a good look at the person, because he didn’t look up in fear of getting hit in the face, but he claims it looked like a tall woman was hitting him. At the time of the occurrence, there were only three people in the building. The man fixing the boiler, and two people fixing the front door, who were both upstairs the entire time.

Another man was hospitalized after he was cut severely on his arm underneath his elbow. His doctor informed us it appeared as if somebody had attempted to remove the nerve in his arm commonly referred to as ‘the funny bone’. The man still refuses to tell us what had happened to have injured him so badly.

I myself was injured, due to what I think, was a paranormal influence. We were bringing boxes from the cellar to the upstairs, one was filled with barbed wire that was meant to be used to line the outside fence with, when I suddenly lost my balance on the steps.

The building was not too long after marked condemned and was not subject for anymore renovation by our crew.

The Russian fellow told us that this building linked with another world. I believe that what he meant by that, was that the house was trying to force the events that had previously occurred, to occur again by making it visible in the rooms for a short period of time and being able to hear what was going on at times.