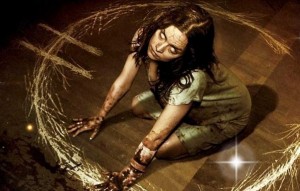 The French court of the Sun King, Louis XIV, was a flamboyant, extravagant place. But underneath the facade was a cauldron of hatred, deceit and social climbing. And underpinning the more unsavoury factors of the court was a conspiracy of murder and supposed witchcraft.

After the suspicious deaths of several of the French nobility, Louis ordered the Commissioner of Police, Nicholas de la Reynie, to investigate. Opening the Chambre Ardente, or Burning Court (a black draped room with candles), in 1677, over the following three years, 320 people were arrested and 36 were executed.

Reynie’s investigation began with the arrest and torture of fortune teller Marie Bosse, who had boasted that she could be hired to kill husbands. Under torture she began a series of confessions and namings of others.

Reaching right up to the heart of the French court, a Coven was unearthed. Practices described included using naked females as altars, and cutting the throats of babies to drink their blood. At the centre of the Coven was Catherine Deshayes, a short, plump, but not unattractive ‘witch’ better known as La Voisin. Controlling her Coven from a Paris villa, she indulged in astrology and seances, and police found various poisonous potions, wax images and other paraphernalia.

But her speciality was alleged to be poisoning the husbands of those who wanted to climb socially, and give love potions to others. Towards the end of the affair, the King’s mistress, Madame de Montespan, was implicated in the Coven, though she escaped with her life.

Medieval theologian St Thomas Aquinas did much to associate witchcraft with the Devil, arguing that demons formed an evil army of lesser angels in league with Satan; demons who could lure humans to his service.

These humans were the witches who, as the mythology formulated, met at diabolical sabbats where much debauchery would be done, including blood sacrifice and showing allegiance to the Devil by kissing his anus.

Typical of this is the case of Isobel Gowdie, one of the witches tried at Auldearne near Inverness in 1662. Isobel, an attractive redhead who entered into a boring marriage with a farmer, shocked the elders of her local kirk by admitting she had been a witch for some 15 years.

Such shock declarations and actions are often entered into by bored partners today, but in the times of the witchhunts, it was far more dangerous, as Isobel found out.

It is not recorded whether Isobel was executed, but, when her confession is taken into account, it is hard to believe that she survived. For Isobel declared that she had met the Devil, renounced Jesus, and given herself to him.

On his instructions she had killed several people with diabolical arrows and often met the Devil with other women where he had sucked her blood and copulated with her.

Describing the Devil as a big, black, hairy man, she would fly to see him on a little horse. Indeed, her descriptions of the debauchery that went on at these ’sabbats’ were most graphic, even though many commentators accept that they were really figments of a fantasising or disturbed mind.

The reality of witchcraft was, though, very different. One popular term associated with it is the ’sabbat’. Still practiced by many witches today, the sabbats usually happen on the four great pagan festivals of Candlemas, Beltane, Lammas and Samhein, better known as Halloween. Covens will gather, perhaps in a forest glade, where the witches venerate nature.

Such covens are traditionally said to consist of 13 members headed by a priest or priestess. Usually they venerate nature through the Goddess, who is usually associated with the moon, and her consort the Horned God; a Godhead who predates Christianity and ideas concerning the Devil, and is widely associated with hunting.

Nowadays witches prefer to call themselves Wiccans, a word associated with the old pagan fertility religions. Not all witches practice in covens, preferring to work alone. Indeed, there appears to be no formal religion involved in witchcraft. Rather, it is simply based on age old beliefs in latent powers associated with nature.

However, due to the power of the mass media, the above ‘mythologies’ still tend to be widespread. From silly fanatasising people, to someone who was most likely nothing more than a murderess, sensationalism must offer something more mysterious and macabre.

Alternatively, the Dianic tradition venerates the Goddess in the form of Diana, Goddess of Hunting. This tradition has attracted a distinctly feminist tradition and ideology. But contrary to popular beliefs, witches are far removed from associations with the Devil, and they do not, now, indulge in sacrifice.

As to the evil influences of witchcraft, the media has made much of the concept of Black and White witches. Yet even this is more a media creation than a reality. Wiccan folklore does have the concept of the Left and Right Hand Path.

The Left is seen as bad, whereas the Right is good. Clearly, as in all walks of life, there will be those who try to use the ritual of Witchcraft to do bad, but for the majority the golden rule of witchcraft is known as the Wiccan Rede:
And if it harm none, do what you will.