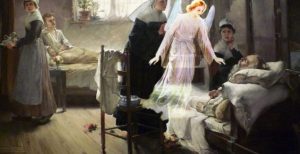 Dying visions have been used alternately to support two competing views. The first is the theory that deathbed experiences are a result of a dying brain or are drug-induced hallucinations.

The second is that end-of-life visions offer evidence of life after death, God, and ultimate purpose.

Despite what doctors, caretakers, family members, or friends of a dying person believe deathbed occurrences to be, research into the dying process and needs of the dying suggest the best approach to take is one of tolerance and acceptance of a dying person’s reports of deathbed apparitions.

People on the cusp of death frequently interpret their visions at death to be spiritually significant and glean comfort and reassurance from them.

What is a Deathbed Vision?

The visions people close to death have are not understood very well. Comparatively little research has been done into the deathbed experience, which commonly includes deathbed visions (DVs) and near-death experiences (NDEs).

The subjectivity of deathbed phenomenon (DBP) and difficulty of researching it scientifically makes it seemingly impossible for researchers to figure out what a dying person is actually experiencing. In many respects, the process of dying is a mystery.

The dying process frequently entails aspects that defy and violate a rational and materialistic view of reality. Common deathbed visions include visitations by dead family members (a deceased mother is especially common) and friends; visions of angels or other celestial light beings, religious figures, and God; and glimpses of heaven or paradise.

People close to death frequently report that family members or friends who have passed away have come for them, to help ease their transition to the “other side.”

Dying Visions as Part of Religions

Various religions and spiritual traditions contain mythology about the dying process. Indeed, one of the primary reasons religions exist and are relevant is because they offer a way for people to grapple with and come to terms with the inevitablity of death.

DeathReference.com provides a thorough discussion of deathbed revelations in religions. The article “Deathbed Visions and Escorts” claims, “Visions at the time of death and announcements or omens of impending death, as well as escorts for the dead, are part of many cultures and religious traditions stretching back through antiquity.”

Examples of otherworldly experiences and visions in religions are plentiful. For instance, in many indigenous cultures, shamans are intermediaries between the physical and spiritual worlds and act as guides for those who are dying.

Angels factor heavily into the Christian tradition, and Eastern religions include elaborate systems for aiding the soul of a dying person into its next incarnation.

Whether deathbed visions are culturally and religiously conditioned responses to death, a result of an ill and dying brain, or evidence of a transcendent reality is not a debate that will be resolved any time soon.

Carmela Ciuraru, in her review of the book “Visions, Trips and Crowded Rooms: Who and What You See Before You Die”, by death and grief expert Dr. David Kessler (a protégé of Elisabeth Kübler-Ross), writes, “Whether such visions are ‘real’ is beside the point – what matters is that all of these dying patients believed in what they had experienced, and found solace and relief in the midst of suffering.”

Many pioneering researchers in the dying process, including the aforementioned Dr. Elisabeth Kübler-Ross and Dr. David Kessler, suggest that the most effective approach palliative-care and hospice professionals and family and friends of dying people can take is to be empathetic, caring, noncritical, and tolerant of their experiences and visions during their journey into death.