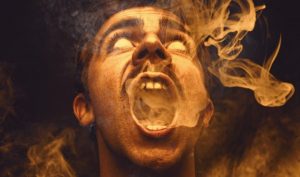 His body was partly consumed by a fire that was driven by the wick effect, which commonly occurs near, and is aided by, an open fireplace. His death was recorded as “spontaneous combustion” by the coroner.

In the early hours of 22 December 2010, Faherty’s neighbour, a Mr Mannion, was awakened by the sound of his smoke alarm. Mannion went outside to find heavy smoke coming from Faherty’s house.

Getting no answer from Faherty’s house, he roused local residents and the Gardaí and the fire brigade was called.

Faherty’s home was searched by forensic experts from the Gardaí and the fire service. Faherty’s body had been found lying on his back with his head closest to an open fireplace.

The fire had been entirely confined to the sitting room and the only damage found was to the totally burnt body, the ceiling above and the floor beneath him. No trace of any accelerants was found and there was nothing to suggest foul play had taken place.

Assistant chief fire officer Gerry O’Malley told the inquest into the death that after a thorough investigation, fire officers were satisfied that the open fire was not the cause of the blaze which led to Faherty’s death.

A post-mortem carried out by pathologist Grace Callagy noted that Faherty had suffered from Type 2 diabetes and hypertension but had not died from heart failure.

Callagy concluded that “The extensive nature of the burns sustained precludes determining the precise cause of death.”

In September 2011, the west Galway coroner, Dr Ciaran McLoughlin, informed the inquiry into the death that he searched medical literature to determine the cause of death.

The coroner referred to Professor Bernard Knight’s book on forensic pathology, which states that a high number of alleged incidents of spontaneous human combustion had taken place near an open fireplace or chimney.

The coroner subsequently made a statement to an inquiry: “This fire was thoroughly investigated and I’m left with the conclusion that this fits into the category of spontaneous human combustion, for which there is no adequate explanation.”