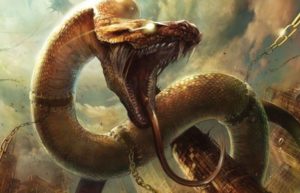 Spanish author Miguel Seguí, writing in Año Cero magazine, mentions a conversation he held with Tunisian camel-driver Mohamed Charaa regarding the perils of the northern reaches of the Sahara desert.

In the vicinity of the town of Gafsa, said Charaa, the truly unlucky ran the risk of coming across monstrously large snakes known as taguerga which measure up to 4 meters in length and whose poison is lethal.

In the late 1950s, desert nomads spoke of giant snakes that devoured their goats and sheep; when one specimen decided to help itself to a young camel at a desert campsite, the nomads decided that no matter how much they loathed the idea of doing so, it was necessary to appeal to the colonial authorities for help.

It was thus, according to Seguí, that a French army detachment was sent to investigate from the vicinity of Beni Ounif. It wasn’t long before these romanticized desert warriors came across the largest snake they had ever seen—so large that their Enfield rifles were unable to fell it.

The soldiers had to resort to a heavy machine gun to slay the beast, which measured a nightmarish 20 meters long—very nearly 90 feet.

Although the serpent’s skin was preserved for a while, the political turmoil of the times and the withdrawal of French forces from the area caused all traces of the spectacular find to be lost.

Seguí was able to determine, however, that a year earlier, a native auxiliary had been attacked by a giant snake measuring anywhere between fourteen and fifteen feet. The skin of this desert beast had indeed been preserved and seen by many, but was ultimately sold for forty-five thousand Francs to a private collector.

Years would go by before another case was reported. It wasn’t until 1967, during the construction of a massive dam in southern Morocco, that bulldozer operator Hamza Rahmani saw a seven long serpent engaging in a singular activity—eating its way through the construction site’s entire supply of engine grease.

Using his bulldozer’s blade, Rahmani was able to kill the creature, which measured a little over nine meters long and had a “mane’ of hair running along its head. According to Seguí, the construction project was bedeviled by the creatures, with a ten-meter long one—complete with twisted horns—being seen the following year and twelve to fifteen-meter one reported two years later.

While even the most open-minded may scoff at these measurements and call them overblown, the author reminds us that eighteen-meter long snakes were common during the Pleistocene in South America.

But stranger things than giant snakes can be found in the world’s deserts. Ing. Marco Reynoso of Mexico’s defunct Fundación Cosmos A.C. describes a case involving a group of teenagers during the months of December ’89/January ’90 as they traveled to visit a series of caves located in Cerro Pajarito, in the Mexican state of Chihuahua on the road leading to the Paquimé archaeological site.

According to Alvaro Villareal, one of the witnesses, they found two dead, 3-point deer and one doe on their path. The animal’s carcasses were not rigid and the eyes had been eaten by ants. Three perforations, spaced at 3 cm., were on their necks forming a triangle. Footprints similar to those of a puma were seeing in the area.

When the group entered into one of the caves, they heard squealing sounds and smelled an odor of burned wood; standing on an outcropping 15 meters away was an entity resembling the one described as the “Chupacabras”, which advanced toward them.

Seized by panic, one of the would-be speleologists drew his pistol and fired an entire clip at the creature, which was impervious to the hail of bullets. The group ran out of the cave, uncertain if the creature was dead or not. They also claim having encountered a thin, metallic green entity standing some 80 cm., which they took to be an “extraterrestrial”.

Drawings were subsequently made of both creatures. It is worth noting that the deserts of Northern Mexico have also been the locale for many encounters and sightings of winged creatures best described as “gargoyles” or even “Birdmen” (see “Return of the Birdmen” by Scott Corrales, FATE October 1998).