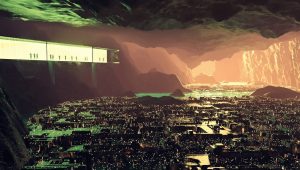 In a Coast to Coast AM interview, author and researcher David Wilcock claimed that an alliance of ancient civilizations lives within the planet, reports ufospain.es.

These ancient civilizations have long called the bowels of the Earth their home and were about to open up to the world.

Wilcock firmly believes that during the long history of our planet, numerous advanced civilizations such as the Atlanteans went underground to survive the chaotic times that ruled over the surface of our planet.

“Eventually, they decided to settle in their new underground habitat.”

The existence of underground tunnels and passageways has been the subject of debate for centuries. Ancient civilizations around the world speak of these entrances leading to whole new realms, situated deep below the surface of the planet.

Ancient humanity in Turkey seemed to have recreated these legends by building great underground cities like Derinkuyu, or the largest ever found near Cappadocia in Turkey.

Wilcock believes that the US government is aware of its presence due to its accidental discovery through clandestine projects aimed at building secret underground bases.

In the interview, Wilcock stated: “They have these tunneling machines and sometimes they break somewhere they’re not supposed to go, because there are individuals there.”

While citing the testimony of contactee Corey Goode, Wilcock stated that the tenuous relationship between inner Earth beings and those living on the surface who are aware of their existence has fractured in recent times.

“This military industrial complex had previously worked with these beings and had treaties with them and is now trying to kill them,” Wilcock said.

This is why, according to Wilcock, these Inner Earth Civilizations have come together to respond to the great emerging threat of recent times and are turning to interstellar entities in hopes of enlisting their help in fighting the forces that are trying to destroy them.

Wilcock also stated that a long-sought meeting between the two groups finally took place and Goode was allowed to observe the exchange.

“The interstellar entities made an impressive request after the meeting.” “The Inner Earth beings came out of it in shock,” Wilcock said. “They have been asked to reveal themselves to us as part of the reveal.”

In case the underground societies complied with the request, he reflected: “I think we are going to discover that the underground bases are much more extensive than we thought and much older”.

David Wilcock is a professional lecturer, filmmaker and researcher of ancient civilizations, consciousness science and new paradigms of energy and matter.

He is rewriting entire branches of science and leading a new narrative of human history, one that includes races of highly advanced beings that we share earth and space with.

Scientists have recreated the face of a man who died 8,000 years ago