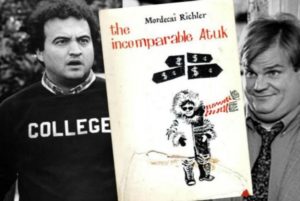 In 1963, Canadian author Mordecai Richler penned the novel “The Incomparable Atuk.” The book is the story of a Canadian Inuit who finds himself in a strange world, the big city of Toronto. Thinking that the book could be turned into a good comedy film, screenwriter Tod Carroll wrote a script, changing Atuk to a native Alaskan and the big city to NYC.

The search for the actor to play Atuk then began, the first choice being “Saturday Night Live” veteran John Belushi. Belushi read the script and reportedly was excited about doing the film, of course that never happened. Belushi died from a drug overdose on March 5, 1982, at age 33. If you believe the legend, the Curse of Atuk had claimed its first victim. The project was shelved but would be revived in 1988 with another comedian playing Atuk.

The screaming comedy genius Sam Kinison, not only read the script but actually began filming the movie. Soon production on the film was halted when Kinison demanded that large parts of the script be rewritten. A long legal battle ensued between Kinison and the production company that dragged on for years but was eventually settled. Unfortunately, before the film could be completed Kinison was killed in a car accident on April 10, 1992, near Needles, CA.

By March 4, 1994, the Atuk script had found its way into the hands of another big screen funny man, John Candy. This time the Atuk Curse struck immediately as Candy was reportedly reading the script at the very moment he suffered a fatal heart attack in Durango, Mexico.

Ever persistent to make the film, the Atuk script next went to another SNL alumni, Chris Farley. Farley planned to take the role of Atuk but just as his comedy idol Belushi, Farley died from a drug overdose on December 18, 1997, at age 33. Farley was the last one to die after planning to play Atuk. He was not however the last one to die after reading the Atuk script.

After deciding to accept the role of Atuk, Farley passed the script along to his friend, comedian Phil Hartman, to see if Hartman might be interested in playing one of the roles in the film. Hartman was murdered by his wife at his home in Encino, CA, on May 28, 1998.

The Atuk movie has never been made. The script is now tucked away somewhere at United Artists.