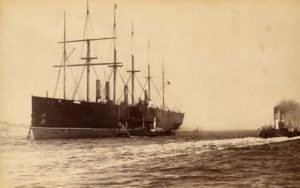 If ever there was a ship with a curse on its haunted decks, it had to be Isambard Brunel’s colossal steamship Great Eastern.

Although not considered large when compared to the super tankers and luxury liners plying the oceans today, Brunel’s steamship, launched on the Thames River at London in 1858, was 680 feet in length. Thus it was a monster for its time, an estimated six times larger than any ship ever built.

Although steam powered ships were a relatively new innovation in its day, The Great Eastern boasted amazing engineering that is still being used. For example, the steamer was given a double iron hull, attached to a girder frame. It was driven by both paddle wheels on its sides, and a propeller.

Construction of such a massive ship involved millions of hand-driven rivets. An estimated 1,000 workers were hired to comprise 200 “rivet gangs” to get the job done. Because someone small had to squeeze inside the narrow space between the double hulls, young “bash boys” were hired to do this work.

These boys spent 12-hour days in the confined space between the hulls, the only light furnished by a candle, and enduring the deafening thunder of the riveters’ hammers.

Some of them never came out. Their skeletal remains were found when the ship was dismantled for scrap. Boys fell to their death while working at deadly heights. Other gruesome accidents took the lives of other workers.

Brunel built his ship facing parallel to the river and planned a side launch. When the hull was at last finished and the great launch day arrived in November, 1857, the people of London gathered to watch. This is when the curse first made itself known.

One written account of events that day told of how the workers removed the massive blocks holding the ship in place. “Just after noon there was a cry of ‘She moves, she moves.’

The multiplying winch that was to control the launch spun out of control throwing the men operating it into the air. John Donovan, aged 74, died from severe internal injuries, and a further four men were injured. The ship had moved just three feet.”

It seems that the sheer weight of the 12,000 ton hull cracked its way through the skids that were supposed to send it gently sliding into the river. Instead of going to the water, the hull settled into the ground. It took another three months and the expenditure of all the money Brunel had for fitting out his new ship to complete the launch.

It was finally afloat, but with no money to get The Great Eastern fitted out for sea, the vessel lay in harbor nearly a year. Then the Great Ship Company bought the ill-fated ship and finished the job.

On its sea trials that fall, an explosion in the engine room killed one man instantly and so badly scalded the others that at least four of them died hours later. Brunel, who had suffered a stroke, died after getting the news. A closed water cock was blamed for the blast, which was so powerful it destroyed the forward funnel.

The Great Eastern never lived up to expectations. The ship never carried a full complement of passengers. On its fourth trip it suffered severe damage in a storm at sea. In 1862 it struck an uncharted rock and tore open its hull.

The ship was saved from sinking by its double hull, but the damage was costly. The ship continued losing money for its owners. Attempts were made to sell the steamer, but there were no takers.

The men who worked aboard the steamer complained of an eerie hammering noise constantly heard from far below decks. They said it often woke them from their sleep, and was loud enough to be heard during storms. It was said to be made by the ghost of one of the souls left trapped between the hulls during construction.

The Great Eastern is perhaps best remembered as the ship that helped lay the first transatlantic telegraph cable. It was the only ship large enough to carry the length of cable required for the task.

They say it took five months to load the cable. Then after several attempts to successfully lay a continuous line without breaking it, the cable linking America with Europe was put in place by September, 1866.

After this, the great ship sat moored on the Thames for about 12 more years, a rusting haunted hulk that nobody wanted. Old photos of it show that its sides served as giant billboards and I once read where an attempt was made to turn it into a temporary floating prison. Then in 1888 the mighty ship was cut up for scrap. The Great Eastern was no more.

A Time Slip In Wotton