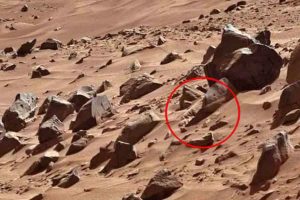 Something strange was discovered on the surface of Mars – the Curiosity rover stumbled upon an object that resembles the “face of an Egyptian statue.” The Techneblog portal writes about the discovery of the Martian rover.

In one of the images that Mars transmitted to Earth, you can see what looks like the “face of an Egyptian statue.” The similarity of a Martian boulder with an artifact from Ancient Egypt was pointed out by many social media users who noticed an anomaly.

It goes without saying that the US National Aerospace Agency (NASA) did not comment on the discovery of the Curiosity rover.

What specifically photographed Curiosity on Mars is unknown. We can only make certain assumptions, but you need to understand that it will not be possible to confirm or refute them soon.

Some theorists claim that the strange “Egyptian face” is an artifact left over from an ancient Martian civilization.

It can be assumed that the object in the picture is of a natural nature. On Mars, strange rocks and natural structures have been repeatedly found that looked like faces or anthropomorphic figures, but in fact turned out to be bizarre creations of nature.