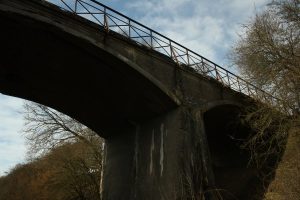 Cry baby bridge means that an infant died in a tragedy at that site, and that to this day you can still hear it crying as you cross. There are over a hundred of these bridges all across America, obviously we won’t be covering the hundreds of bridges that fall under this category, but we will cover the five most haunted bridges in the US.

You might think the Helltown Cry Baby Bridge would get a mention just for its name, but this region of the Boston Townships is covered top to bottom with creepy lore. Most of that creepy “lore” is just that. There’s not much founding in a lot of it, but the Helltown Cry Baby bridge is a different matter.

Although many have reported the sounds of a baby crying, the most notable occurrences on the bridge are of a physical sort. Reportedly, if you leave your car, you’ll return to it to find it surrounded by children’s footprints and sometimes hand prints on the window.

More importantly, if you leave your car unlocked with the keys in the ignition you’ll return to find it running. There aren’t many details to the origin story of the Helltown Cry Baby Bridge, just that a child was thrown from its edge and died below.

The Egypt Road Cry Baby Bridge gets special mention here if only because the sounds of the crying baby can be heard all day and all night. The bridge is completely isolated near the end of a dead end road in an area closed to the public.

The story of Egypt Road tells that a newly-wed couple picnicking with their infant daughter were distracted, some say in the throws of a lovers quarrel, and others say they were getting frisky, but either way they lost track of the child who turned up drowned in the river having fallen from the bridge.

The experiences found on this bridge are of the simple crying baby sounds sort, and the train tracks located no more than a hundred feet away have their own set of experiences. It is said that cars have a tendency to stall without reason while crossing the tracks at High Mill Ave.

The Maud Hughes Road is said to have been the site of many terrible accidents and suicides, in fact 36 people have officially been reported dead on or around the Maud Hughes Road Bridge. It’s debatable as the whether or not Maud Hughes fits the “cry baby bridge” criteria as the first recorded occurrences on the bridge definitely points to something else.

A couple’s car stalled on the bridge. The man got out to get help while the girl stayed. When the man returned, the girl was hanging on the bridge above the tracks. What’s more odd is that the man was found dead with no apparent cause. To this day witnesses have reported wisp like figures on the bridge accompanied by faint conversation, then comes the sound of a woman screaming.

The Rogues Hollow Cry Baby Bridge crosses Silver Creek and is located amongst numerous haunted locations in Ohio. Stories of headless horsemen and the spirits of miners have been told throughout the region since the very early 1800s. In the most classic sense of Cry Baby bridges the tale of Rogues Hollow tells that a young woman rejected by her lover threw her newborn infant from the bridge.

The infant died in the cold waters below. Today numerous reports have told of the sounds of a crying baby which seems to emanate from all directions. If that wasn’t creepy enough, the crying gets louder and more intense as you leave the Cry Baby Bridge.

Solving the mystery of Atlantis: Main theories about the Lost City

Ghost of Major Thomas Weir: The Wizard of West Bow