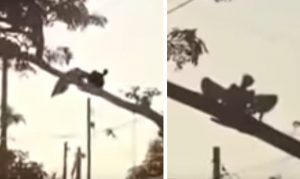 A few days ago, a video with a strange creature, shot somewhere in Nicaragua, was uploaded on YouTube channel “Ovnis vs Ufos”. The creature was seen sitting on a tree next to the road in an unspecified city.

A woman taking it off on her phone says something behind the scenes, but unfortunately her words are not translated.

The creature has a large humanoid head, four limbs growing out of the torso and huge wings similar to those of a bat.

This creature, unlike any known animal, moves like a spider on a tree branch, and then spreads its wings and flies somewhere to the right under the frightened cry of a woman.

In appearance, the creature looks like a gargoyle or another species of American flying humanoids.

Meanwhile, skeptics are almost sure that the video is edited.