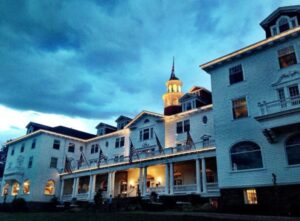 The Rocky Mountains are home to a hotel that’s widely considered one of the most haunted places in America and it has ties to a renowned horror film.

The Stanley Hotel in Estes Park, Colorado, is said to be haunted by several different ghosts, from past owners to children, and even a couple pets.

Along with its haunted reputation, the Colonial Revival-style hotel also inspired author Stephen King to write “The Shining,” one of his most popular novels that was adapted into a 1980 film starring Jack Nicholson.

This is the place zenonas.sg-host.com reader Kim V Thomas Kimberly visited a few days ago.

“So last night I decided it would be fun to go on a ghost tour at the beautiful iconic Stanley Hotel in Estes Park, Colorado.

“I took a ton of pictures during the tour of the inside of the Hotel as this is what they tell you to do as you never know what you’ll see on them.”

“After the tour, my friends and I took more pictures on the outside of the Hotel and I was so surprised at what I didn’t see when taking them but what I saw after.”

“I took these pictures last night and could not wait to go back to the Hotel to find out what they thought of my photo and what room number this image was I see on my photo was coming from.

“The Stanley Hotel was so excited to see my photo, they said that I had gotten extremely lucky and that this was one of the best photos taken of what appears to be a woman or child with long dark hair in a white dress or night gown pushing the curtains back and looking out the window.

“We went to the room, room 323 which we could not go in but no one was in there. From the door of the room, you could see the stairs and the 4th floor which is known to have the ghost of children.

“They are now calling her Sissy and will share my photo on the ghost tours everyday. In the 1st picture, there is nothing in the window, the 2nd picture I took there was.”

Legend has it that during King’s stay in room 217, he had a lucid nightmare about his young son being chased around the hotel. Guides say the author jerked out of bed, went outside to smoke a cigarette and that’s when he started to lay the groundwork for “The Shining.”

And over the years, many people have claimed to have captured the ghosts of the hotel on camera.