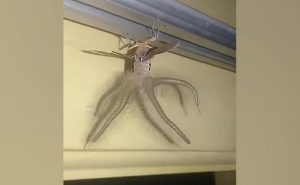 One resident of Bali had the fear of his life when he discovered this strange criterion on his home’s ceiling.

Hari Toae defined the mysterious creature–which had a set of furry tentacle-like appendages protruding from its tummy–as “alien-like.”

“I will let it stay in my house, but only for the night,” he said. “I don’t want it to scare my guests away. It’s not something I’ve ever seen before. I don’t think it comes from this neighborhood.”

However, as it turns out, the uncommon visitor to Hari was in reality a harmless moth species known as the Creatonotos gangis, typically native to Australia and South-East Asia.

The tentacles are fragrance organs used by the moth to generate pheromones in order to attract a mate.