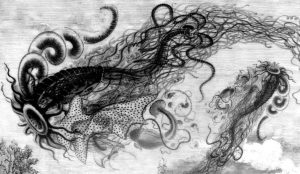 In September, 1891, people saw a bizarre entity flying in the sky over Crawfordsville, Indiana. The Indianapolis Journal published the first sightings on September 5th. Two men were working on a wagon at 2 AM on the 4th when they saw the mysterious eel-like creature flying about one hundred feet above the ground.

It appeared to be twenty feet long and eight feet wide and flew with several pairs of fins and circled a house before disappearing in the east. When it returned, the men fled in terror. Methodist minister Reverend G. W. Switzer and his wife also saw the cryptid.

The cryptid returned the next evening. Hundreds of people witnessed its antics. They described it as a creature with viciously flailing wings and a blazing red eye as it flew three hundred feet above them.

It squirmed as if it was in tremendous pain and emitted melancholic wheezing cries. Once, it lunged down at a group of observers who claimed they felt its hot breath.

Distinguished cryptologist Loren Coleman wrote about the item in the newspaper and credited highly respected paranormal researcher and author Jerome Clark for supplying the information. The article, written by the Evening Gazette’s editor, was a newspaper item on September 11, 1891.

He wrote that a prior article, referring to the Crawfordsville monster which appeared in the newspaper on Tuesday, September 8th about the creature.

The case reminded him of a similar incident in Chicago, Illinois during spring 1849 when he was a young boy. The monster was initially sighted between 9:00 p.m. and 10:00 p.m. People were flabbergasted and horrified by the eerie supernatural sight and the noises it emitted as it flew above Lake Michigan.

The thing was described as a glowing gargantuan coffin with a demonic face and head. Flames spewed out from its eyes and mouth. Eerie screeches were emitted from its twisted lips.

Some nervous women fainted while others had hysterical fits. Allegedly, a priest conducted the rite of exorcism that was unsuccessful.

The Millerites, a religious cult, were joyous and accepted the monster as proof positive that the end of the world was near.

They were disciples of William Miller, a New York farmer, who claimed to discover when Jesus would return to earth again, as written in the Bible. The sighting of the monster terrified the editor when he was a child.

In this case, the mystery was solved. It was a hoax. Some young men constructed a large kite that resembled a coffin and covered it with phosphorous. The demonic face was a pumpkin Jack-o’-Lantern and the music was provided by unfortunate kitten which was tied to the kite’s tail.

Theories About the Crawfordsville Monster

Charles Hoy Fort, the father of modern paranormalism, investigated the sightings after he read about the incidents in the September 10, 1891 issue of the Brooklyn Eagle.

He was convinced that the Reverend Switzer didn’t exist, but decided to investigate. Fort was amazed when he discovered the man did exist and corresponded with him.

One source maintains that Switzer confirmed the monster’s sightings while another states Fort never received the information.

Vincent Hayes Gaddis, American author, journalist and member of the Fortean Society, was living in Crawfordsville and interviewed people about the monster.

He concluded that the creature was a living entity, not a UFO. Today’s cryptologists agree and categorize it as a flying cryptid, dragon, serpent or atmospheric creature.

Other flying unidentified mysterious animals have been sighted in the United States and Africa. Some have scales and resemble prehistoric flying reptiles, while others are feathered.

There is one that resembles a man. Perhaps, some day, a flying cryptid will be captured and join the realm of known animals.