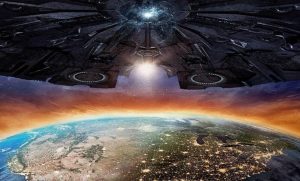 Aquaman recently came out on home video. It was a critically praised film and a box office hit with the audience. People were happy to see Arthur Curry’s adventures in a solo mission. However, before this recent installment, Curry took on aliens in Justice League opposite his other heroic allies.

Since he is now king of Atlantis, the sea is no longer the enemy of the surface. If an alien invasion were to occur, as it did in Justice League, could an alliance between the land and sea be able to stop an alien invasion? This would be in a realistic scenario and not one that is seen on film.

Currently, there are no superheroes that we know of and just the armed forces remain in each country. They protect and guard against enemies foreign and domestic. We also have intelligence agencies that give us inside information on what our enemies are doing.

With this real-world standpoint in mind, we do not know what lies beneath us. It’s probably not a universe and it is something that has not been as explored as space. It remains interesting to think if there are humanoids living below us.

Humanoids that are below us would have different civilizations and technologies than our own. It would expose the surface world to new treasures that we have never found prior. It would change the face of our world if we had the opportunity to engage with them diplomatically and craft an alliance that would change the course of our history.

It’s fascinating to think about how we could work together to develop our worlds together. It could create not only diplomatic opportunities but economic opportunities for us to exchange ideas and develop new business ventures together.

Mostly, it would be like having another country out there. In Aquaman, each nation has its own armies and peoples, which would give us the chance to see all the diversity that is underneath our oceans. Nothing has been explored that much below us, so it would take our great explorers to find out more about the world around us.

Once we discovered these new nations below us and learned more about one another, the question comes down to it: would we be able to form an alliance against the aliens? It would totally depend on their levels of technology that are below us.

As Aquaman portrays, the Atlanteans and many other nations below us have had far more advanced technologies than we could ever dream. Mankind was always far behind the Atlantean nations and has been something they take great pride in it. As we see with mankind’s weapons in the film, they do not ever affect Arthur Curry. It’s only when David Kane/Black Manta gains access to Atlantean technology via Orm is when the tables turn.

This is where the earth could be a very powerful force indeed. If we were able to combine the technology of land and sea as well as the natural capabilities of the two species, it would be likely that we could put up a fight against the alien menace.

Another question remains though: what levels of technologies do the aliens have? If their technology is further along than mankind or our Atlantean brethren, it could mean the end for the earth as we know it. It all depends upon whether the world of man and the Atlantean nations are able to form an alliance.

That is the bottom line in all of this. If we are not able to form a partnership with our allies beneath us, there is no chance for us to survive. However, if we make such an alliance work and form bonds between ourselves and our brothers and sisters who can breathe both underwater, on land, and vice versa, we may have a chance in the end of defeating the aliens.

Only time will tell whether we can rise together from the waters of the earth to defeat those who wish us harm from the skies.