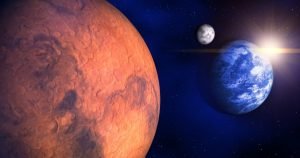 Former chair of the astronomy department at Harvard, Professor Avi Loeb, wondered if an advanced Martian civilization could have terraformed our planet, making life possible.

As far as we know, Earth is the only planet in the solar system where life exists. Scientists are eager to find out if there are other planets where biological life is possible.

One of the closest planets to Earth is Mars. Scientists have discovered that in antiquity, billions of years ago, the Red Planet was very similar to Earth. Based on the evidence the researchers found, Mars likely had an atmosphere, vast oceans, rivers, and lakes. In general, it met all the necessary conditions for the existence of life.

Probably, when Mars was covered in greenery with liquid water on the surface and an atmosphere that protected it from the harsh conditions of space, Earth was a planet where life was impossible.

Everything changed suddenly about 2.5 billion years ago. Mars lost its atmosphere and went from being a planet that could have developed life to a frozen desert like the one we see today. Its oceans disappeared and its rivers and lakes evaporated. Today, scientists are exploring the remains of these reservoirs.

Some researchers believe that when Mars lost its habitability, Earth found it. The so-called Great Oxidation event led to aerobic metabolism and complex life forms, which eventually gave rise to many of the species that exist on Earth.

Recently, astrophysicist Avi Loeb wondered if the Earth could be terraformed by Martians. Professor Loeb asks this question in his latest article on Medium.

In his essay, the astronomer calculated that if an advanced alien civilization arose on Mars twice as fast as on Earth, and when the Red Planet lost its habitability, then all the infrastructure on Mars would have been destroyed and turned into dust by asteroid impacts long ago.

But what if this advanced alien civilization had the means and technology to travel to other planets in the solar system? What are the chances that such a civilization, which foresaw that their planet was dying, decides to change the other world?

As Professor Loeb explained, the strong oxidation and growth of cyanobacteria could be artificially grown by “suppressing competing species, seeding, or increasing the amount of nutrients that allowed cyanobacteria to thrive.”

In case Martians arrived here first, Musk’s current ambition to bring humans to Mars resembles a trip plan to a childhood home after the parents passed away.