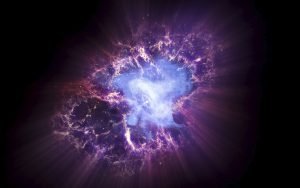 People are more connected to the universe than they think. New research shows that neutron stars and human cells are constructed in the same way.

The structures where they seem to consist looks like parking garages. Greg Huber physicist at UC Santa Barbara has such forms examined together with his team.

Huber hit the ‘parking’ not only in the interior of human cells, they were already discovered in the crust of neutron stars.

Neutron stars are strange objects. They arise as a result of supernova explosions and are extremely compact.

These stars have a diameter which is often no more than a few kilometers, but may include the mass of up to two suns.

The researchers have discovered that the material is spirally in the cytoplasm of human cells.

Although the forms in neutron stars are a million times bigger than that in a human cell, they are very similar to each other.

Physicists have been pleasantly surprised at the similarities between the structures.

“That matter similar stages arise in biological systems is very surprising,” said Martin Savage of the University of Washington. “We are obviously dealing here with something interesting.”

Huber noted that the similarities are still a mystery. “Our research is not the end of anything,” he said. “It’s just the beginning.”

The research is published in Physical Review C.