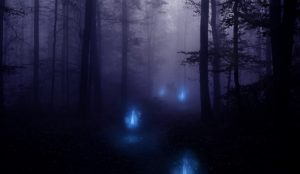 In the 500s, death could come suddenly. According to legend, David, Wales’ patron saint, prayed for warnings. Vision revealed death would be foretold by lights.

Corpse Lights can be red, white or blue and are seen indoors and outdoors. They hug the ground, float in the air and hover over places of those about to die. They’re called by various names, including Corpse Candles, Jack-O’-Lantern, ignis fatuus, corposant, fetch-candles and fetch-lights.

A corpse candle or light is a flame or ball of light, often blue, that is seen to travel just above the ground on the route from the cemetery to the dying person’s house and back again, and is particularly associated with Wales.

A corpse fire is very similar as the name comes from lights appearing specifically within graveyards where it was believed the lights were an omen of death or coming tragedy and would mark the route of a future funeral, from the victim’s house to the graveyard, where it would vanish into the ground at the site of the burial. The appearance was often said to be on the night before a death.

A small pale or bluish corpse candle foretells the death of a baby; a big one, death of an adult. Multiple candles divulge the number of people soon to die. Colors vary: red for men, pale blue for women, pale yellow or blue for children. When the lights are approached, they disappear.

In South Hampshire, England, people believed the lights accompanied souls of the dead and extinguished when they left the earth. Among European rural people, especially in Gaelic, Slavic, and Germanic folklore, they are held to be mischievous spirits of the dead or other supernatural beings attempting to lead travellers astray.

Sometimes they are believed to be the spirits of unbaptized or stillborn children, flitting between heaven and hell. Other names are Jack O’ Lantern, or Joan of the Wad, Jenny Burn-tail, Kitty wi’ the Whisp, or Spunkie.

– In the 1700s, several people who passed Golden Grove in Wales saw three corpse lights glide down the river at various times three weeks in succession. They talked about the phenomena and wondered who the death omen was for. Soon after, three family members of the nobility who lived at Golden Grove died simultaneously in different parts of the country.

– Jack, a ship’s captain, based in Carmarthenshire, Wales, lived in a rented room while not at sea. One evening, when he was abroad, a man from a neighboring farm saw a dim light in the room. He asked a family member if Jack was home. The answer was no. Others saw the light. A few weeks later, they learned Jack died in Singapore when they saw it.

– Reverend Mr. Davis’ sexton’s wife was in bed and saw a blue corpse candle on her table. Within two or three days, she learned a baby had been stillborn that night. Not long after, she saw another candle. Several days later, a weak baby was brought into their house where he died.

– Jane Wyatt was the housekeeper and nanny for widower Baronet Rud’s three children in Llangathen, Carmarthen. She saw five corpse candles in the maids’ bed chamber. Not long after, all five died of suffocation while asleep.

– A group of Welshmen was returning to Barmouth after dark. As they approached the ferry house at Penthryn, they saw a light near the house, which they thought was a bonfire. As they approached, it vanished. They stopped at the house and asked about the bonfire and were told there was none. There were no signs of any fire. When the group told others in Barmouth about the incident, they said they also saw the fire. Some of the old fishermen said the fire was a corpse light. The ferryman drowned a few days later in the place the fire was seen.

– That winter, Barmouth villagers saw small lights dancing in the air over Borthwyn. Then, all except for one vanished. The lone light went where some boats were moored and lingered over one of them before it disappeared. A couple of days later, the man who owned the boat, fell overboard and drowned while sailing in it.