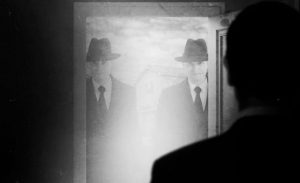 Men In Black (MIB) often travel in groups of three and show up after UFO sightings are reported in an area. Then they proceed to interview the witnesses.

The Men In Black phenomenon is a mysterious aspect of the UFO saga. These strangers, dressed entirely in black, use a method of subtle harassment as they interrogate the witnesses of UFO sightings but refuse to answer any questions themselves. They advise the witnesses never to reveal any information about their UFO experience or the MIB interrogation that followed.

Often they take their leave with a further reminder to the witness to maintain silence or risk potential harm both to them and their families.

Reported incidents with the MIB commenced in 1953 with Albert K. Bender, who described them as “members of the United States government…wearing black suits.”

He claimed that he saw the agents again at a later date when they suddenly materialized in his bedroom and threatened him with prison time if he related any further information. Then they flew him to the South Pole aboard an alien spacecraft and kept him under surveillance until 1960 when they returned to their home planet.

In 1956 Gray Barker published a book, ” They Knew Too Much About Flying Saucers, ” which suggested that the MIB did not represent the US government but were aliens themselves. Some reviewers thought that the book was interesting but presented some wild ideas and the author displayed naivety about trusting the US government.

Bender didn’t provide much in the way of supporting details in his 1962 book, “Flying Saucers And The Three Men.” When he suddenly decided that he might have said too much and retired into seclusion in order to avoid further publicity, there were many questions from the public.

However the apparition of the three ghostly MIB appearing at his home lent a paranormal aspect to the growing MIB legend.

Since the days of the Puritans, perhaps Americans are historically wary of strangers dressed in black. With a stretch of the imagination, the MIB draw a few parallels to the 1835 short story, “Goodman Brown” by Nathaniel Hawthorne.

In the story, the Puritans were afraid of evil men dressed in black who haunted the forests around their settlement. Brown has a meeting in the woods during the night with one of these strangers who ask him to participate in a black mass. Although he is unwilling, he goes along with it.

When he returns home, he can’t remember exactly what happened or even if anything did happen. Perhaps he had a nightmare. However he can never forgive himself for his own weakness is committing the deed and is shocked at the basic moral evil in mankind.

Description of the MIB

No one has reported any female operatives. The men range in age from 20 to 30 years old and have olive complexions with high cheekbones and dark slanted eyes. Some observers suggest that they might wear toupees and makeup. They may be short or tall; movements are mechanical. Sometimes they may appear to have trouble breathing since they have a breathless quality to their voices.

Witness have noted that they always drive large black cars such as Lincolns and Cadillac’s. In the UK, they prefer Rovers, Jaguars or a Rolls Royce. The automobiles may bear strange insignias.

The MIB may claim to have a CIA or US Air Force connection and they do provide identification, but it can never be verified at a later date.

Tommy Lee Jones and Will Smith starred in the 1997 movie, Men In Black, which portrays the MIB phenomenon from a different angle. Here they aren’t aliens but instead are the good guys trying to foil a UFO plot to destroy the world.

As these two federal agents investigate the alien threat to Earth, they discover that there is an intergalactic plot to assassinate two diplomats from opposing galaxies.

The attack is set to occur in New York City and the agents, J and K, must track down the terrorists in order to save the planet from utter annihilation.

Several Mothman and Flatwoods Monster observers reported MIB lurking in the area after the 200 sightings and the ultimate bridge failure. An alien threat has been suggested for many years, especially after WWII and many credible witnesses have related their own experiences. These include two American Presidents, Jimmy Carter and Ronald Reagan.

Whether or not there is an alien threat or a government issue, many people have reported consistent accounts of strange activities over many years. As the data accumulates, perhaps our questions will be answered.

A New Religion And World Domination: The NWO’s Project BLUEBEAM