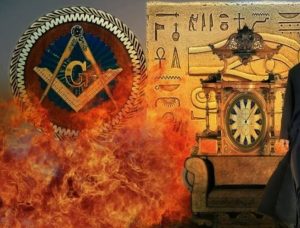 Not everything is a conspiracy, but let’s face it: those who strive for power are also those most likely to abuse it. The correct use of power requires integrity and wisdom, virtues human nature doesn’t come with by default; they are acquired virtues and thus quite rare. It follows that due to this rarity, of those who gain power the majority will lack the integrity and wisdom to use it correctly. And so conspiracies arise, for conspiracies are nothing more than underhanded schemes of self-serving individuals bent on gaining and maintaining power.

This basic observation has held true for thousands of years, and being that power hungry individuals are also ruthlessly intelligent and persevering, enough time has passed for the establishment of gargantuan conspiracies designed to eventually give these madmen ultimate power over mankind. This madness is not limited to human psychopaths, but extends to nonhuman ones who have long set their eyes on dominating mankind. Toward this end, there exists an ancient global shadow government still coordinating world affairs from behind the scenes, running a script that through machiavellian principles guides mankind ever closer to acquiescing its collective liberty in exchange for security under global and cosmic tyranny.

The global shadow government, also known as the New World Order or illuminati, consists of human elite directed by hyperdimensional and cryptoterrestrial forces who seek total domination over mankind. These human elite are assigned the task of enslaving the rest of mankind and then handing over control to their nonhuman superiors. Because such individuals are hungry for power anyway, they have no reservations about enslaving those beneath them.

To consolidate this power, world events are scripted toward creating conditions that rationalize the increasing removal of freedom and independence from nations and individuals. Wars, civil wars, and revolutions provide this catalyst. In the future, earth cataclysms and an overt alien invasion will be used toward these ends.

There is no American government:

Our elected government is a sham. Elections are manipulated to put key puppets into office, and polls are rigged to sway mass opinion. A few token mavericks are allowed to give people the illusion their voice is being heard. Politicians are blackmailed or bribed into serving the New World Order. Blackmail comes via past activities they may have been tempted into partaking, or else such politicans have been bribed with luxuries and promises of further power, privilege, and survival in times to come.

The majority of those who become politicians are corrupt. It takes psychopathic ruthlessness to make it to the top of politics, and because of networking and other factors, only those selected by the shadow government ultimately make it to the top. There are countless ways of getting rid of dissenters, from assassination to discrediting to blackmail.

Tricks used by world manipulators include Hegelian dialectics and false dichotomies. Hegelian dialectics is better known as problem-reaction-solution, whereby a problem is created to push people into accepting a rigged solution. Incidents such as the Oklahoma City bombing, Columbine massacre, and 9/11 attacks were engineered by the shadow government to justify the further removal of freedoms from the populace to “keep them safe.” Ultimately, liberty traded for security leads to slavery.

False dichotomies are illusory choices, options that all lead to the same outcome. The dichotomies of “liberal vs. conservative” and “secular vs. religious” are false dichotomies because each side leads to the same end result of ignorance and imbalance. The political system relies on the illusion of two party choice which makes people think they’re living in a democracy. There is no democracy because mass opinion is swayed through media manipulation and rigged polls, and there is no republic because the electoral college consists of bought members who obey the shadow government. The most willing slaves are those who think they are free.

By laws not being enforced, people demand more laws to solve perceived problems. These laws then pile up until one day all can be enforced at once and create a legal form of totalitarianism.

Public education is behavior modification designed to create worker drones instead of capable individuals.This is done through systems of reward and punishment, compartmentalization of the mind, preoccupation with meaningless work, political correctness, and distortions of facts and principles in textbooks.

The media has no obligation to report truth, only to make money and obey orders from the government. Thus they either appeal to the lowest common denominator in mass consciousness and thereby help lower mass consciousness further, or else they report stories that propagate an agenda. News is designed to emotionally shock and hypnotize the public into giving up their self-determination and discernment.

The economy is heavily manipulated:

Stock markets and commodities are rigged to provide funding for the shadow government. What appear as random fluctuations in the market are instead planned in advance, allowing the elite to retract their investments before a planned downturn or crash. This pumping mechanism happens on a greater economic scale as well, allowing the elite to periodically harvest wealth from ignorant citizens who buy into the illusion of a free economy.

The shadow government uses the Federal Reserve and the IRS as further sources of funding. The Federal Reserve prints millions of dollars in cash every year but pays only for the manufacturing cost. This fiat money is then injected into the economy where people assume it has real worth and thus do real work and create real products in exchange for these worthless reserve notes. Normally this would cause inflation, but what the Federal Reserve prints the IRS later takes out through income tax. Because what goes in as fake cash is then taken out as real wealth, citizens are shafted and the parasites of humanity grow fatter.

Why all the control?

No self-serving individual wants to lose his power. Control is necessary for those in power to maintain and increase their power. Manipulation tactics are designed to make people predictable, and what can be predicted can be controlled. To make people predictable, they must be deprived of knowledge, intuition, physical and vital energy, initiative, creativity, spontaneity, willpower, and individuality. The means of suppression surround us, comprising the fabric of society via its institutions and culture. All impulses that cannot be suppressed are diverted toward serving an agenda, and as the saying goes, the road to hell is paved with good intentions.

Each self-serving person serves higher self-serving forces, and each takes what they want from those they control. This turns Earth into a farm and prison (in addition to the original purpose as a school and training grounds). Lower forces want money, security, pleasures while higher dark forces want spiritual power, energy, and conquest.

Human elite are characterized by superior knowledge and power. Depending on how this knowledge and power is used, they can be of positive or negative orientation. Secret societies seek isolation from general population, either to protect themselves and work in peace, or to gain an advantage by covertly manipulating the population.

What characterizes secret societies is that they are elite, but not all parts of them are necessarily elitist. Some just stay hidden to better carry out their jobs. Past misunderstandings caused them to be persecuted and so they have learned not to flaunt their presence.

They either start out as elite groups intent on control, or positive groups intent on preserving, refining, and sharing knowledge, but the latter inevitably become corrupted. This causes splits within those groups whereby the positive parts go deeper into secrecy while the corrupted parts join the dark hierarchy to manipulate mankind.

Generally, secret societies such as Rosicrucians and Freemasons fill their lower ranks by recruiting from the more successful members of the general population. Fraternity and goodwill characterize these outer levels, but often they are a control mechanism to keep positive individuals from spreading their knowledge by soliciting them into taking secrecy oaths. From these members, those with exemplary potential are recruited into the upper levels of secret societies and placed into positions of power to carry out the recruiters’ agendas.

Secret societies often consist of dualities. The dark half seeks knowledge and power to manipulate others, and the light half seek to protect this knowledge from misuse. There are battles between those who seek to abuse knowledge and those that are destined to protect it. These battles are often fought through the masses, who are blind to their own participation in an invisible war.

All dark secret societies are after knowledge that would increase their power and ability to manipulate and conquer. This is achieved by extracting knowledge from the general population, buying the brains to do exotic research, scouring the Earth for hidden knowledge and technology from past civilizations (Templars and Skull and Bones are/were known for this), channeling occult demonic forces for knowledge, and working with cryptoterrestrial and alien hyperdimensional groups for their technology.

Secret societies tend to contain concentrations of specific bloodlines, particularly those bloodlines that have a greater portion of off-world genetics, meaning those with closer genetic ties to alien factions. This is because genetics and soul tend to correspond and influence each other, and genetics also influence one’s probability trajectory (morphogenetic destiny). It is why presidents have strong concentrations of royal blood. The same can be said for positively oriented souls — they also tend to incarnate into certain bloodlines, but these bloodlines are harder to trace because divine synchronicity arranges their branching and merging instead of arranged marriages as royal families are known to engage in.