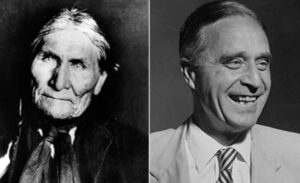 Since many members of the Bohemian Club are also members of Yale’s prestigious Skull and Bones club, the theft of Geronimo’s skull in 1918 is worth mentioning.

According to the Apache warlord’s descendants who sued Yale University in 2009, Prescott Bush (George W.’s grandfather) and a group of Skull and Bones members raided Geronimo’s grave and made off with his skull and his left hand. They placed the skull in a glass case in the secretive tomb where the society holds their meetings.

Why would they want to do that? And what does it have to do with the New World Order?

The history of Skull and Bones is complex, but it is believed to have originated in Germany in the 1800s. Because of that origin, the Skull and Bones is closely connected to the Bavarian Illuminati, which gives it inextricable ties to the development of a one-government world.

It has all the ingredients for the ultimate conspiracy theory.

Take President Bush and his father, throw in a legendary Apache chief, strange rituals performed in the dead of night in a building named the Tomb, grave robbing, and a secret society of elite students called Skull and Bones.

The oft-told tale is that Bush’s grandfather, Prescott Bush, and some of his buddies at Yale, dug up the grave of Apache chief Geronimo, removing his skull and femur and placing them in a glass case in the lobby of the Tomb, the headquarters of the university’s notorious Skull and Bones society back in 1917. 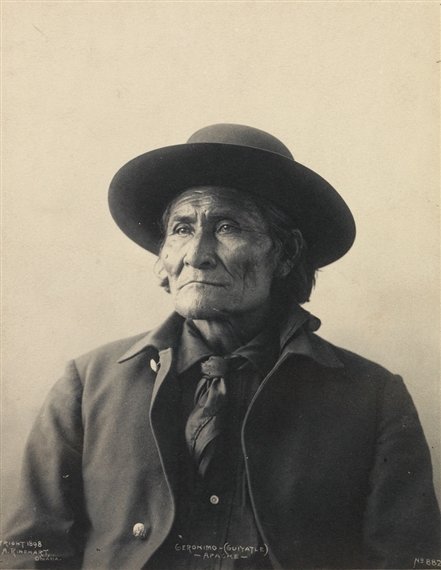 It’s a story that’s become legend at Yale, passed down from generation to generation. Despite the lack of clear evidence, every new clue or rumor just adds to its allure.

But could a medicine man in Mescalero, N.M., be able to definitively prove whether the story is true?

Harlyn Geronimo, the great grandson of the Apache warrior, wants to prove that the skull is authentic by offering his DNA to see if it matches the bones, and he’s demanding the return of the remains.

“I really believe that that’s my great grandfather’s skull,” Geronimo tells ABCNews.com. “We want to return him to the Gila Wilderness, where he was born, so the spirit can complete its journey and go on to the next world. Presently, he’s buried as a prisoner of war and it still has that status over him.”

Geronimo has written to the White House, hoping to obtain the president’s help at retrieving his great grandfather’s remains. And he’s considering legal action against the society.

At least one member was willing to talk, emphatically stressing that the story is just a tall tale. Coit Liles claims that Geronimo’s skull is not sitting in the Tomb. “It’s not there and it never has been there,” Liles says, adding that Prescott Bush or any other Bonesman never dug up the bones. “It’s just a story.”

Liles is the secretary of RTA Incorporated, the trust that runs the society. The society may be secretive about their rituals but the trust is a little more open about its activities.

In its 2005 tax return, the New Haven, Conn.-based trust claimed $3.7 million in net assets, and that it spent $236,683 on education programs of “intellectual inquiry, sensitivity training and personal development” for Yale students.

Despite the denials, plenty of other people believe that the tale rings true based on recent evidence.

Last year, a Yale historian uncovered a letter that seemed to confirm the story. Written in 1918, from one Bonesman to another, the letter describes how Prescott Bush and some friends dug up the grave when they were stationed for military duty in Fort Sill, Okla.

“The skull of the worthy Geronimo the Terrible, exhumed from its tomb at Fort Sill by your club … is now safe inside the [Tomb] together with his well-worn femurs, bit and saddle horn,” reads the letter.

The authenticity of the letter certainly lent some credibility to the story, says Alexandra Robbins, who wrote “Secrets of the Tomb,” a history of Skull and Bones.

“Of all the tales about Skull and Bones booty — the skull of [President] Martin Van Buren: not true, Pancho Villa: not true, Geronimo: possibly true,” says Robbins. “Of all the rumors, that one has the most plausibility. The letter included a very detailed description of the skull.”

As part of her research into what she calls “the country’s most powerful elite alumni network,” Robbins interviewed over 150 Bonesmen. “They say there is a skull in a glass case just inside the entrance to the Tomb and they’ve called it Geronimo.”

Almost two decades ago, another Native American, Ned Anderson, attempted to obtain the skull. He claimed that then-Congressman John McCain and then-Congressman Morris Udall arranged for him to meet Jonathan Bush, the first President Bush’s brother.

“According to Ned, they brought out a skull but it was obviously a skull of a ten-year-old and they were trying to bluff him and tried to get him to sign papers saying that he would never speak about it again,” says Robbins. Anderson claimed that he rejected the offer.

The 1918 letter was authenticated by Judith Schiff, the chief research archivist at Yale’s Sterling Memorial Library. “I think a lot of people thought it was just a legend, but the letter says that students dug up the bones and thought it was Geronimo’s,” says Schiff.

“Prescott Bush and the others were at Fort Sill, getting ready to go fight in World War I as part of Yale ROTC, and they may have been roaming the area and had a chance to bring it back to Yale or sent it somehow.”

Another Skull and Bones expert, writer Ron Rosenbaum, has his doubts.

“There is no evidence that the skull brought back to New Haven by Prescott Bush and those other people was Geronimo’s skull,” he says.

“Local anthropologists say the grave was unmarked. Skull and Bonesmen like to boast about it, but it’s more likely that they were conned by some locals who said, ‘Hey, you want to buy Geronimo’s skull?’”

Ex US Presidents Warn About The ‘Shadow Government’ Running The USA