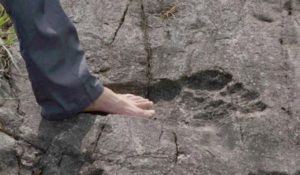 A group of anonymous researchers have digged tunnels in New Zealand in search of proof of giants, reports rnz.co.nz.

For the better part of four years, the mysterious group, whose members have yet to be identified, digged out a network of tube-like caves. Almost always working under the cover of darkness their goal is to discover signs of pre-Polynesian giants or “tall ones” who once lived in the region.

Concerns were raised, not only because of the potential to damage genuine archeological evidence, but also because the landowner did not grant them permission to be there.

An anonymous member presented a large leg bone in one recent video published by the group.

“This here, my friends, is a human bone of a pre-Polynesian inhabitant,” he said. “You can tell by the triangular shape. It’s most likely a tibia, which would make this… individual 8ft 4 inches tall…”

“Regardless of its length, this is an older bone than any human being in New Zealand.”

The bone was later dismissed by archaeologists as that of a moa (a huge extinct bird).

“Providing proof of 8′ humans to the world will be bigger than finding Tutankhamen,” the leader of the group, who is known only as ‘IJ’, told Radio New Zealand.

“[It will be] the most talked about worldwide story of the millennium.”

Nevertheless, as things stand no definitive, verifiable evidence of these “tall ones” has materialized.