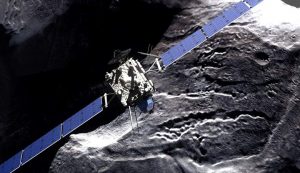 The short-period comet “Churyumov-Gerasimenko”, discovered in 1969 by Soviet astronomers Klim Churyumov and Svetlana Gerasimenko, is one of the most mysterious “non-planetary” cosmic bodies known to man.

In 2014, the European automatic rocket interplanetary station Rosetta found molecules of 16 organic compounds on it, which instantly gave rise to rumors about the possible interaction of the comet with certain life forms, that is, in fact, aliens.

Another confirmation of this intriguing theory has now been received by ufologists, who studied the official website of the European Space Agency last week and unexpectedly discovered a very remarkable audio recording there.

It turns out that the aforementioned Rosette apparatus recorded in 2014 the oscillations of the electromagnetic field of a comet, and the result was apparently so strange and unusual that no one declared about it publicly.

Turning on the video below and rewinding it to 1:35, you can hear these vibrations, translated into sound.

Ufologists are convinced that this is not just about the bursts of the electromagnetic field of “Churyumov-Gerasimenko”, but about the real radio signals sent by the celestial body into space. Too artificial and rhythmic they seem.

Some researchers believe that this is not a comet, but a spacecraft of representatives of an extraterrestrial civilization, camouflaged as a cosmic body.