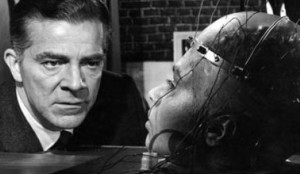 In the mid seventies, the English channel was the venue for a secret and amazing psychic cold war incident. The channel is the busiest shipping lane in the world, and many incidents happened there during that period. But an incident occurred that still baffles intelligence personnel.

A warning light on a marker buoy had gone out, and Trinity House who deal with the buoys, had to send out a small boat a.s.a.p. to put it right. When they reached the buoy, they found that a nearby Russian trawler was casually using it as target practice for small arms fire.

The Trinity House repair crew quickly retreated back to the bigger boat, and on looking through binoculars saw the Russian trawler was bristling with concealed armaments. The Admiralty decided to ask a passing U.S. aircraft carrier to put itself between the buoy and the trawler, so repairs could be made on the buoys light. The bill for the hire of the U.S. aircraft carrier to the British admiralty was £3000 per hour.

Some years later on defector evidence, it was said that the whole operation was ‘controlled and psychically over watched’, by Wolf Messing trained thought transmission operatives, on board the trawler.

The Russian society for experimental psychology founded in 1891, went underground during the communist oppression – when officially such things were frowned upon – yet over the next 60 years, advances in psychic techniques and disciplines were sharpened and honed by soviet scientists, to an astonishing degree.

Soviet documents describe such things as “motor impulses”, which we in the west call ‘telepathy’, had advanced to such a point that restricted G.R.U. documents show successful tests in sending messages from submarine to surface, and even mentally intercepting the feel of U S sent coded message traffic.

How the west came to find out was an interesting story in itself. A senior Soviet operative from Directorate One, the department – that ran the psychic testing – was continually passed over for promotion, due to his very poor birth. His mother, a cleaner in the building, took away scraps of paper and smuggled them to the west in revenge. Vladimir Durov, with his animal and people mental tests, showed the value of mental influence. In Britain during WWII, Alexander Cannon, as part of Churchill’s occult ‘Black team’, showed similar in his lecture called; “Proving the impossible – Possible.”

This news held the British M.O.D. in a state of shock. Famous Neuropathologist – Vladimir Bekhterev – was forced into the ‘thought suggestions programme’, by communist hardliners. In military terms, any psychic operations are called ‘Psychotronics’. Bekhterev became head of the Brain Research Institute at Leningrad, where he had unlimited funding to improve by whatever means possible the abilities of cold war psywarriors.

Sensitive subjects were hot-housed in experiments round the clock, day after day ,month-in month-out, until their abilities were honed to a knife edge. The battery effect, was were a battery of wills – a team of thought transmission agents – could will the U.S. president to make decisions in the Soviet favour. This was demonstrated in the Cuban missiles crisis, when the U.S. was stopped from using this as an excuse for an attack. As one senior defector said; “..but it was alright for the U.S. to have missiles on OUR doorstep in West Germany!”

Successful usage of this was also claimed to interfere, confuse, and muddle defectors statements, as in the James Angleton investigations. The defector also claimed successful testing, and feasibility for the psychotronics team to stop the heart beat of someone from across the world, in preparation for an attack on the U S president and others.

Professor Leonid Vasiliev, Yuri Orlov, and Wolf Messing, have all separately been identified as part of the Soviet psychic warfare initiative, by both A. I. P’s (Agents In Place) and defector informants – who under the Witness Protection Programme – have given startling evidence of developed clairvoyance, telekinesis remote viewing, telepathy and thought disruption. Also interference, to the point where a subject can be taken under remote control, and used as the ‘Manchurian candidate’ of say a Sirhan Sirhan.

Alexander Litvinenko still had much to tell us on this – and the missing communist funds – of 90 billion pounds, and the “suicide” of Nikolai Kruchina, when he was murdered recently. Much Soviet documentation in the top secret red papers category – and now in the west – has been used by Paul McKenna and Derren Brown type performers to amusing effect.

Regrettably many experiments under the orders of Joseph Stalin himself, were carried out in Soviet mental hospitals. Subjects were said to have had their capabilities enhanced and extended to the point of madness. The Mitrokhin archives show that after Krushchev’s accession in 195,6 Psi research was given increased funding in secret, while openly decried as nonsense.

Lavrenti Beria – the psychopathic secret police chief – claimed Wolf Messing could read his thoughts, and could yet make, train, and build the greatest of all spies. In a superb article in Unexplained magazine, it states that just prior to the siege of Leningrad in 1940, Vassiliev showed that the muscles of an insects intestines respond to electrical impulses emitted from contracting human muscles – showing amazing connective thought between species. Plant experiments also show this same connection.

Czech parapsychologist Dr. Milan Ryzl claimed the most startling research has never been seen, particularly on suggestology. Frank Hyde – the London Psychic – demonstrated at the U S Embassy in 1975, how he could mentally rummage the drawers in the secure room – while standing downstairs in the foyer – and re-tell what the documents said. His psychic connection to the U.S. space shots, if true, is rumoured still classified.

In response to defector information, the U.S. under several people such as general Stubblebine, began training their own psywarriors, using much material from Britain, under Winston Churchill’s wartime Black team magical experiments.

Dr Venyami Yermolayev with his psychokinetic crew, demonstrated the levitation of extremely heavy objects by thought alone, and Dr. Venyami Pushkin documented men being lifted high into the air, as in the India rope trick. Neurophysicist Dr. Gennady Sergayev, even invented a bio-energy measuring device, for testing these wonders.

In 1970 the book “Psychic Discoveries Behind the Iron Curtain” was published by Schroeder and Sheila Ostrander, and upset the Russians for revealing its espionage defense and psywar capabilities. And most of all, how to intercept and alter thought telepathy between enemy agents. See documentation by ‘General Boris Ratnikov’.

The first conference on Psychotronic Research, was held in Prague in 1973. Four-hundred delegates attended, and were told of the “woodpecker device”, which induces mental confusion, and imbalance in mind control experiments. But entrenched skeptics deny this ever took place, while the U.S. Government trains, uses and recognizes these Psi Agents. It refuses to pay the ransom for the psychic who pinpointed the whereabouts of Saddham Hussein – even down to the hole in the ground!