In 1977, the Brazilian island of Colares would be home base for some of the most extraordinary close encounters ever recorded. Only a few of the Island’s city of Colares’ 2,000 inhabitants would be spared the frightening light beams shot to the ground by many various flying objects.

A number of residents managed to take photographs of the phenomenal flying death machines, or “chupa-chupas,” as the locals called them.

Never had there been an event of unknown, flying objects with so many different variations of shape and size. There were reports of small UFOs, large UFOs, cigar-shaped, saucer-shaped, and more. Some of the objects were luminous, some were not, but all of them could be deadly. The unusual phenomena of the light beams lasted for months, sending the island of Colares and surrounding areas into a state of panic.

These strange death rays seemed to come from a Hollywood movie- projections of different colors of light and intensity aimed directly at frightened, fleeing citizens. Many hit by the beams were knocked unconcious and awoke with many various medical ailments, most prominently a type of anemia, or weakness. Many were diagnosed and treated by local physicians, hard pressed for a solution.

The activity of the chupa-chupas was so frequent and powerful that the people of the region felt that aliens were trying to make contact with them though the powerful beams. As to the origin of the UFOs, some theorized that they would come and go from an undersea base near the Bay of Marajo, allowing the strange flying machines to appear, shoot their beams and disappear almost instantly.

During the siege, the citizenry was so frightened that many of the women left Colares, taking their children away from the terror of the UFOs. The men kept a vigil to protect their homes and possessions. They made large bonfires to light up the night, ofttimes used fireworks and banged on metal objects in hope of scaring off the intruding craft. Soon this was given up, seemingly it had no effect. 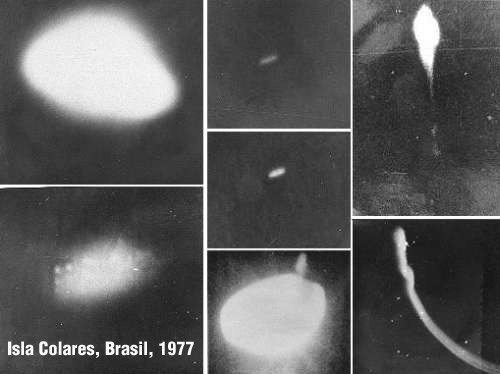 One group of victims claimed to the press that: “They were immediately immobilized, as if a heavy weight pushed against their chest. The beam was about seven or eight centimeters in diameter and white in color. It never hunted for them but hit them suddenly. When they tried to scream no sound would come out, but their eyes remained open. The beam felt hot, almost as hot as a cigarette burn.”

Doctor Wellaide Cecim Carvalho wrote: “All of them had suffered lesions to the face or the thoracic area.” The lesions, looking like radiation injuries, “began with intense reddening of the skin in the affected area. Later the hair would fall out and the skin would turn black. There was no pain, only a slight warmth. One also noticed small puncture marks in the skin. The victims were men and women of varying ages, without any pattern.”

Some of the local newspapers and journals tried to make the people of the Colares area believe that they were seeing satellites, military balloons, or other everyday objects. This only went to make the citizens angry, as they knew what they were seeing, and none of the media’s explanations came close to describing the chupa-chupas, or their beams of light.

COMAR (Comando Aéreo Regional, the Regional Air Command of the Brazilian Air Forces), arrived in Belém, and made a series of research projects in the region, under the project name “Operation Plate.” (Operation Saucer) They would never affirm that UFOs or flying saucers were responsible for the beams of light, opting for a more “normal” explanation.

The Brazilian Air Force soon discovered the reason for the panic on the island, as their own personnel became targets of the beams of light. They did manage to take four video films of the objects, and many photographs, but no explanation was ever offered that satisfied the people of Colares.