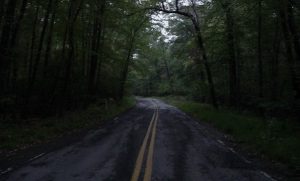 If you notice unusual lights in the woods, dark shapes, unusual sightings, don’t stop the car!

Just a 90 minute ride from New York City, Clinton Road is legendary between ghost hunters, ufologyst, and anyone brave enough to drive it.

Clinton Road can be found in West Milford, Passaic County, New Jersey. It runs in a generally north-south direction, beginning at Route 23 near Newfoundland and running roughly 10 miles (16 km) to its northern terminus at Upper Greenwood Lake.

The road and the land around it have achieved recognition through the years being an area rife with numerous stories of paranormal occurrences such as sightings of ghosts, strange creatures and gatherings of witches, Satanists and the Ku Klux Klan.

It is also reported that professional killers dispose of bodies in the surrounding woods—with one recorded case of this occurring. It has been a regular subject of discussion in Weird NJ magazine, which once devoted an entire issue to it. In the words of a local police chief, “It’s a long, desolate stretch and makes the imagination go nuts.”

There are very few houses along the road and much of the adjoining property is undeveloped publicly owned woodlands (either City of Newark watershed or state forest) and the road itself is a narrow two-lane highway that receives little maintenance, is not part of New Jersey’s county-highway system and was until fairly recently unpaved for some of its length, connecting two areas of minimal population and growth and thus having little traffic even at the busiest times of day.

It is also notorious for having the country’s longest traffic light wait. This occurs at a double intersection where Route 23 crosses the road. The two lights can cause motorists to wait for 5 minutes in total. The lengthy wait was a result of traffic planners giving increased priority to Route 23 to reduce the tailbacks during rush hour.

The different areas along or near Clinton Road have been much cited as the setting of urban legends, especially by the magazine Weird NJ, which has devoted numerous articles to the subject:

The ghost boy at the bridge: At one of the bridges over Clinton Brook (Dead Man’s Curve) close the reservoir, if you put a quarter in the middle of the road where the yellow line is, at midnight it will supposedly be promptly returned by the ghost of a boy who drowned while swimming below or had fallen in while sitting on the edge of the bridge. In some tellings an apparition is seen; in others the ghost pushes the teller into the water if he or she looks over the side of the bridge in order to save him from being run over as he was in life.

Besides the ghost boy, there have been other ghosts described by Weird NJ readers. One claims to have seen a ghost Camaro driven by a girl who supposedly died when she crashed it in 1988 (any mention while driving the road at night is supposed to trigger a manifestation). Another claims to have encountered two park rangers one night while camping with friends near Terrace Pond, a glacial tarn on a ridge accessible from the road by hiking trails, who in the morning turned out to have been the ghosts of two rangers who had died on the job in 1939.

The Druidic temple: A conical stone structure just east of the road south of the reservoir was said to be a site where local Druids practiced their rituals, and horrible things might come to pass for any intruder who looked too closely or came at the wrong time.

The building is actually an iron smelter left over from the American Revolutionary War and the War of 1812 when the United States was forced into creating an economic independence to complement its political freedom. It was listed on the National Register of Historic Places as Clinton Furnace in 1976. It is currently fenced off by the Newark water department to prevent any entrance and the liability for injury that might result.

Ghost truck: There are accounts of phantom vehicles: pickup trucks or even floating headlights not attached to any vehicle that supposedly appear from nowhere in the middle of the night and chase drivers to the end of the road, then disappear.

Strange creatures, from hellhounds to monkeys and unidentifiable hybrids, have allegedly been seen at night. If not of supernatural origin, they are said to have been survivors of Jungle Habitat, a nearby attraction that has been closed since 1976, which have managed to survive and crossbreed.

Some visitors to the area report also seeing people dressed weirdly at odd hours who simply stare at those who see them and do not speak. Sometimes these people disappear or are apparently not seen by those present.

Lastly, some travelers have reported a feeling of uneasiness or mounting dread as they drive down the road, sometimes so great that they have to turn back.

In 1905, a man named Richard Cross built a castle on high land near the reservoir for his wife and three children. Later in the 20th century, it fell into ruin after a fire had destroyed part of it and thus became a popular destination for hikers and local teenagers looking for secluded locations to camp out and have parties.

According to Weird NJ, “visitors have written telling of strange occurrences in or near the castle site, such as people going into seizures and having bruises appearing on their bodies afterwards, or having strange, disturbing visions. Writings that suggest Satanism have been reported as appearing on the castle’s interior walls, particularly in areas that were supposedly inaccessible.”

Newark’s water department razed the castle as an attractive nuisance in 1988, but the foundations remain and several hiking trails still leads to the site.

The Weird NJ magazine reports that, according to legend, in May 1983 a bicyclist going down the road noticed vulture feasting at a spot in the nearby woods. He investigated and discovered it was a human body.

The report states: “an autopsy found that the man had died of foul play, remarking something initially puzzling: ice crystals in blood vessels near his heart. His interior organs also had decayed at a rate far slower than his skin. Pathologists concluded that someone had frozen his body after death in an attempt to mislead investigators into believing he died at a later time than he actually did.

The man was identified as someone on the periphery of mafia activities in nearby Rockland County, New York. The investigation ultimately led to the 1986 arrest of Richard Kuklinski, a New Jersey native involved in Rockland organized crime who confessed to being the killer of not only the victim at issue but a veteran hit man for the mob. He claimed to have killed over a hundred others and similarly treated their bodies, which earned him the nickname “The Iceman.” He pled guilty to five of the murders and received two life sentences, which ended with his death in March 2006.”

That’s why Clinton Road remains one-of-a-kind as the strangest, most mysterious and, yes, the weirdest road you’ll ever encounter.