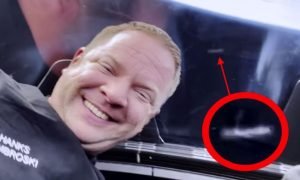 During a live broadcast of the Dragon SpaceX mission in September 2021, an eyewitness noticed a white cigar-shaped object that flew over the astronaut’s shoulders.

Well-known ufologist Scott Waring commented on this situation. He believes that the object flying near the capsule has a metallic sheen. During movement, it bends and flips several times. This suggests that this object is of artificial origin.

The ufologist is sure that this is a UFO, which was controlled by intelligent beings. According to Waring, NASA scientists are aware of what is happening, so they try not to disclose this information.

They, according to the researcher, do this due to the fact that contact with representatives of an extraterrestrial civilization can at one moment make any country a dominant world power. This suggests that contact with the aliens has not yet been established.

In addition, an eyewitness to this event shared an interesting thought regarding the silence of NASA experts. He believes that the agency is in a stalemate.

On the one hand, it is not ready to admit that a UFO was cruising next to the capsule, since this is fraught with the consequences mentioned by Scott Waring.

On the other hand, if scientists said that an asteroid or a failed satellite rushed behind the astronaut’s shoulders, then the volunteers would not be dragged into this capsule by the ears.

After all, this space stone could easily destroy a spacecraft with passengers.

What the astronauts themselves will think if they watch this video?

We recommend watching the video first at normal speed and then in slow motion.

Black UFO getting struck by lightning in Itaquaquecetuba, Brazil