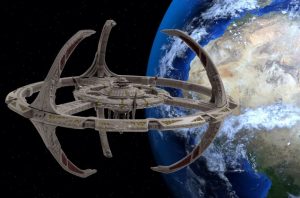 China already has its own orbiting space station, but the country’s National Natural Science Foundation wants scientists to seriously consider what it would take to build an “ultra-large spacecraft spanning kilometers.”

In other words, China just told the world it’s interested in building a spacecraft that is miles long. Yes, miles, reports scmp.com.

The report noted that this particular effort is a part of a major strategic aerospace project, one that would ensure “the future use of space resources, exploration of the mysteries of the universe, and staying in long-term orbit.”

According to an outline of the project shared by the foundation, the work is being managed by an agency under the purview of the Ministry of Science and Technology.

As soon as the news came out, it lit up the Chinese internet, especially among space sci-fi fans. Some thrilled netizens jokingly compared it to the “starships” in movies and TV series.

Some pointed out that the Chinese spacecraft, which is designed to be kilometer-level in size, will at least be 10 times the length of the International Space Station (ISS), which is currently the largest spacecraft flying in space.

Experts stressed that while the difficulties to construct such a spacecraft are great, it has a broad application prospect. For example, it can be used for building a space power plant, enabling a large-scale all-weather power generation from space to Earth’s ground by transferring solar powers to electricity.