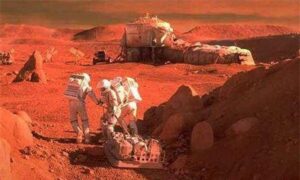 The China National Space Administration (CNSA) plans to defeat NASA in a space race and send a mission with astronauts to Mars by 2033.

In 2017, Donald Trump instructed NASA to land humans on Mars by 2033. The date was formalized in the National Aeronautics and Space Administration Authorization Act, which provided funding for the organization.

In his book Mission to Mars: A New Era of Mars Rovers and Spacecraft Discovery on the Red Planet, geologist Larry Crumpler argues that in reality such a goal is hardly achievable.

He cites a 2019 report from the Institute for Defense Analysis, which states that “a date for an orbital mission to Mars by 2033 is not feasible under any budgetary scenarios and technology development and test schedules.”

The same report notes that 2035 is more likely for a historic flight if the US space agency’s annual budget is increased, but even so, complications and delays are likely.

According to a document from the Institute for Defense Analysis, such a mission would be more likely to be carried out in 2037, and 2039 would be the most realistic due to the likely budgetary problems during its development.

According to Express News, while NASA is already faced with funding problems for its many missions, China is ready to provide any funds required in order to get ahead of the United States in the exploration of Mars. The CNSA is reportedly committed to sending humans to Mars by 2033 on a mission called Space Race 2.0.

In 2021, China has successfully taken an important step towards the exploration of Mars. On May 15, the first Chinese rover Chzhuzhong successfully landed on the surface of the Red Planet as part of the Tianwen-1 mission.

The mission’s tasks include mapping the morphology and geological structure of the planet, studying the characteristics of the surface layer and the distribution of water ice in it, analyzing the composition of surface materials, measuring the parameters of the planet’s ionosphere, and much more.

Prove that Reality Does not Exist Without Observation