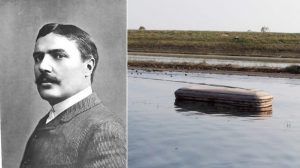 Charles Coghlan was born on Prince Edward Island, off the east coast of Canada in 1841. He came from a poor Irish family, and when Coghlan was ready for school, the neighbors donated funds to send the child to England. Coghlan did well at school and later went through college and graduated with honors. His father had hoped that he would go on to become a lawyer, but he then infuriated his father by declaring he intended to become an actor.

Charles Coghlan’s father was outraged at the idea and told his son that if he did not give up his theatrical ambitions, he would be banned from the homestead. Charles said that in that case, he would be leaving home for good, and promised that he would never return to Prince Edward Island again. Charles and his father never spoke again. Charles began his acting career in London and was to embark on a glittering, successful stage career.

In 1878, he went to seek fame and fortune in America and worked there for the rest of his career. All the while, news of his theatrical success was relayed back to Prince Edward Island, where his exploits became front page news in the island’s press. In his fifties, Coghlan put together a touring theatre company and traveled the United States performing classics of contemporary American theatre, along with some Shakespeare which went down well with audiences everywhere.

The legend goes that one day, Coghlan visited a gypsy fortune teller, and she told the young man something that made a deep impression on him. She said, “Charles, you will be very famous, but you will die at the height of your fame. Your soul will then have no rest until you have returned to the place of your birth.”

Charles was apparently both disturbed but somewhat impressed by the prediction, and often repeated it to his friends in conversation, but they didn’t take it seriously.

On November 27, 1899, after a month’s illness, Charles Coghlan died at the age of 57 of heart failure triggered by the stress of chronic gastritis. He had originally come to the city with his company to perform “The Royal Box”, but his illness prevented him from ever taking the stage. At the time, Coghlan had been getting rave reviews from theatrical critics and was truly at the height of his fame. During the following week, Coghlan was buried in Galveston cemetery. Two years later, a tremendous violent hurricane swept over Galveston.

It killed 6000 people and washed away the sandy cemetery where Coghlan had been buried. On the following morning, the authorities saw that several coffins had been swept out of their graves into the sea. One of these coffins contained the mortal remains of Charles Coghlan. When the Coghlan family were informed about the tragedy, they offered a huge reward to anyone who could find the coffin of Charles Coghlan, but no one came forward in the years that followed.

Legend says that in October 1908, eight years and one month after the Galveston hurricane, several fishermen on Prince Edward Island found a huge burial casket coated with barnacles floating to the shore of the island. According to the silver plate on the casket, it was the long-lost coffin of Charles Coghlan. The coffin had apparently made a journey of several thousand miles from the Galveston cemetery to reach the birthplace of Charles Coghlan, just as the gypsy had foretold it would ten years before.

In 1904, newspapers had reported Coghlan’s coffin had finally turned up on the Texas mainland, but the occupant of the casket must have been someone else, because three years later the New York Times carried a story on January 15th, 1907 that a hunter had found Coghlan’s casket partially buried in a marsh in an “out-of-the-way place” about 18 miles inland from Galveston. If that really was Coghlan’s casket, newspapers remained silent on the ultimate whereabouts of the noted actor’s remains.

Well, at least until 1929 that is, when “Believe it or Not” newspaper columnist Robert L. Ripley came out with a widely published column claiming that in 1908 Coghlan’s coffin had washed ashore on Prince Edward’s Island, 2,000 miles by sea from Galveston. Ripley cited as sources two memoirs written by actors who had worked with Coghlan, but it seems more plausible that the tale morphed from the supposed finding of the casket in Texas in 1907. The legend and whereabouts of Coglans body remain a mystery to this day.