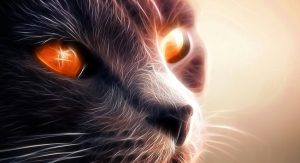 Irish wildcat sightings have been recorded although there are formally no wildcats in Ireland. It’s possible that Scottish wildcats or domestic cats carrying wildcat genes may have found their way to Erin.

Some believe accounts are, most likely, the result of mistaken identity of pine martens. The only true wild feline living in the UK is the Scottish wildcat, an endangered species the size of a domestic cat.

Most zoologists maintain that Ireland has never been home to a wildcat, unlike the rest of Europe. Irish naturalist Michael Viney disagrees.

Dr. Karl Shuker, a respected British zoologist and writer, specializes in cryptozoology. He wrote that King Cairbar of Connacht was called Chinn Chant because he wore a wildcat’s skin attached to his helmet. Was the pelt from a wildcat or a feral one?

The Cait Sith is a supernatural legendary cat in Scotland and Ireland. Cait means cat and sith means mounds of the faerie folk or the mounds.

Many Scotspeople believed they were transformed witches, not faeries. It’s the size of a large dog with a white spot on its chest, rigid bristles and an arched back.

Shuker postulates that it’s possible that legends of the Cat Sìth were inspired by Kellas Cats that are the size of and resemble domestic black felines, only found in Scotland. These cats were believed to be legends and sightings, hoaxes until gamekeeper Ronnie Douglas killed one.

There was speculation that the Kellas Cat might be an unclassified species or subspecies of the European wildcat. Shuker predicted that it would prove to be a complex hybrid of domestic cats and Scottish wildcats.

When the Royal Museum of Edinburgh’s Dr. Andrew Kitchener analyzed eight bodies of Kellas Cats, he found traits in seven that were of both domestic and wildcats, indicating they were hybrids.

1885: WB Tegetmeier gave the pelt of an alleged Irish wildcat to the Zoological Society of London. Upon analysis, it was found to be that of a feral cat.

1906: Dr. RF Schariff wrote a paper about his archaeological excavations in Eden vale and Newhall caves. He maintained he discovered bone of two different felines. Schariff believed the larger ones were those of the Irish wildcat.

1965: AW Stelfox challenged this stating the bones were those of a female and male domestic cat. He wrote that no feline bones had been found in other Irish digs.

While there have been many sightings of the Irish Wildcat, these are unique in that both were killed, but, unfortunately, the bodies weren’t sent to be analyzed.

Pap Murphy, knowledgeable in County Mayo archaeology and history, wrote that in the 1940s, his uncle and father saw one in his father’s shed. The animal was trapped in fishing nets and clutter, so they shot it. The feline was large, growled and had a nail-like end to its tail unlike a domestic or feral cats’ one.

Joe Keery was hunting when he shot what he thought was a fox. When he looked at the animal, he was surprised to see it was feline. It was the size of a fox, light brown, had a long tail, protruding teeth and about four feet long.