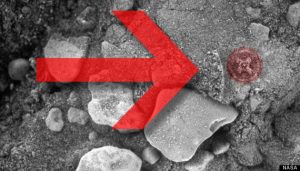 UFO hunters have made a strange discovery in an image sent back by NASA’s Opportunity rover, revealing what appears to be a cross, surrounded by a circle, embedded in the otherworldly rock of Mars.

As The Huffington Post notes, the Opportunity rover has been traversing the surface of Mars for the last decade. The odd, cross-shaped artifact was discovered in a photo captured with the rover’s microscopic imager camera on July 12. The picture itself is microscopic, meaning that the cross-in-circle shape depicted in it is minute.
While The Huffington Post notes that it is possible that the cross-shaped formation was created either by natural processes or, inadvertently, by the rover itself, UFO Sightings Daily puts forth another set of theories explaining the martian cross. Postulating that the cross could well be either the minute fossil of a martian creature or a unique crystalline formation, they suggest that the structure may also be the result of micro technology.

“It may be a fossil of a micro creature, but the ring around it makes it unlikely. It has very few similarities to crystal, but again the ring causes me to rule that one out, however micro technology might be the most likely. Ancient tech, especially small would be very useful to regulate plants, animals and other ecosystems to create a controlled environment. Sure Mars is dry and barren, however NASA Chief Charles Bolden said in the UK this week that ‘Mars did have life on it and may still.’ Ancient micro tech would explain such an advanced world, far beyond our own.”

The strange cross is far from the first formation to catch the public’s attention since NASA’s rovers landed on Mars. Previously images returned by the Curiosity rover have revealed a series of bizarrely shaped rock formations, resembling objects as disparate as a traffic light and a ball. Another rock recently spotted by Curiosity appeared to resemble a shin bone, according to some observers, who regularly peruse the images returned from Mars by the rovers.

Opportunity has been active on Mars since it landed there on January 25, 2004. Exceeding its operating plan by over 10 years, the rover has traveled over 25 miles on the red planet, setting a new record for off-world distance traveled.

While NASA has yet to comment on the cross image, Mars remains the only planet in the solar system to be exclusively inhabited by robots.