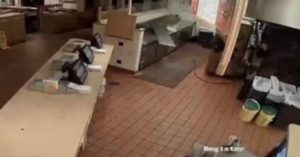 Video footage documented in an Albuquerque branch of Dion’s shows cooking area equipment moving all by itself. The weird event, which was detailed in a posting on the restaurant chain’s Facebook page recently, seems to have been caught on CCTV at a time when no one else was in the building.

In the video clip, a metallic rack (or cover) that was sitting on top of one of the kitchen surfaces can be seen unexpectedly moving sideways and on to the floor, apparently without intervention.

“Look closely…we think one of our stores is haunted…” the store wrote on Facebook.

The CCTV footage has since caused rumors of a paranormal presence in the restaurant.

Might something otherworldly be responsible or was the shelf basically positioned improperly ?

The video clip by itself can be viewed in the news report below.