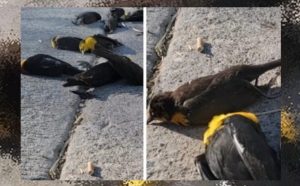 A few days ago, a video (see below) taken by a surveillance camera shows how a large flock of birds flies past the house and many birds suddenly fall down and remain motionless on the pavement.

A little later, there was news that it was filmed on February 7, 2022 and in the Mexican town of Ciudad Cuauhtemoc in the Alvaro Obregon district, Chihuahua.

It is reported that after the incident, someone immediately called the police and when the officers arrived at the address, they found hundreds of lifeless birds on the road near the line of houses.

Every year at this time, this species migrates to Mexico from Canada, but nothing like this has been seen with them before. Despite the fact that several days have passed since the incident, the cause of the sudden sudden death of birds has not yet been announced.

A local veterinarian called to the scene of the incident suggested that the birds could have died due to “local pollution”, low temperatures, or touching electrical wires.

Meanwhile, a theory has become popular in social networks, according to which a powerful magnetic storm, which was observed just these days, could have affected the birds.