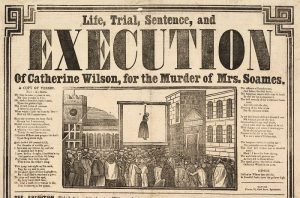 Catherine Wilson was born in Boston England in 1822, and was a serial killing nurse who was hanged for one murder, but was generally thought at the time to have committed six others.

She was employed as a nurse, but she used the position only to find people of means who she could befriend and then ultimately poison after encouraging them to leave her money in their wills. She was described privately by the sentencing judge as “the greatest criminal that ever lived”

Wilson worked as a nurse, first in Spalding, Lincolnshire, and then moving to Kirkby, Cumbria. She married a man called Dixon but her husband soon died, probably poisoned with colchicum, a bottle of which was found in his room. The doctor recommended an autopsy but Wilson begged him not to perform it, and he backed down.

In 1862 Wilson worked as a live-in nurse, nursing a Mrs Sarah Carnell, who rewrote her will in favour of Wilson, soon afterwards, Wilson brought her a “soothing draught”, saying “Drink it down, love, it will warm you.”

Mrs Carnell took a mouthful and, as it burnt her mouth, promptly spat it out. What she had spat out had landed on the bedding, and it was later noticed that a hole had been burned in the bed clothes by the liquid. Wilson then fled to London, but was apprehended several weeks later and charged with attempted murder.

Her defence was that the boy in the chemist’s shop had given her sulphuric acid by mistake. A generous jury accepted this version and found Catherine not guilty. She was not, however, to enjoy her freedom as the police promptly re-arrested her and charged her with murder.

While Catherine had been in custody the authorities had explored her background after she had been recognized by Sarah Soames as the woman who had nursed her mother through her final illness several years before.

Twelve years earlier Catherine had been housekeeper to elderly Captain Peter Mawer in Boston. He had died in October 1854 after making his will in Catherine’s favour. She then moved to London and became the mistress of James Dixon.

Dixon had a serious drink problem but it was still something of a surprise when he died in June 1856 after a short illness – during which he was nursed by his paramour.

James and Catherine had been lodging in the Bloomsbury home of fifty-year-old Mrs Maria Soames who had recently been widowed. The morning of 16th October 1856 saw Mrs Soames complaining of feeling unwell.

Two days later the previously healthy woman was dead. Catherine spread the rumour that Mrs Soames had committed suicide. In 1859 Catherine made several trips back to Boston to visit a Mrs Jackson.

During the last of these visits Mrs Jackson died, just four days after drawing a considerable amount of money from her bank account. The money had vanished immediately after her death.

Catherine’s next victim was 55-year-old Mrs Ann Atkinson. She was James Dixon’s aunt and was in London on business towards the end of 1859. During her visit Mrs Atkinson’s purse, containing over £50, disappeared.

Mrs Atkinson had her suspicions but it did not stop her coming to London to see Catherine the following year. By now Catherine was living in Lambeth with a new lover, named Taylor.

Mrs Atkinson had only been in London a couple of days when her husband, back at home in Kirkby Lonsdale in Cumberland, received a telegram from Catherine telling him that his wife was seriously ill. Mr Atkinson left for London immediately and arrived the day before his wife died, 19th October.

Catherine even managed to get money out of the widower by telling him that Mrs Atkinson had borrowed money from her before she died.

She was tried for the attempted murder of Mrs Sarah Carnell, but despite overwhelming evidence was acquitted to the astonishment probably of almost everybody in Court. When Wilson left the dock, she was immediately rearrested, as the police had continued their investigations into Wilson and had exhumed the bodies of some former patients.

She was charged with the murder of seven former patients, but tried on just one, Mrs. Maria Soames, who died in 1856. Wilson denied all the charges.

Wilson was tried on 25 September 1862 before Mr Justice Byles, again defended by Montague Williams. During the trial it was alleged that seven people whom Wilson had lived with as nurse had died after rewriting their wills to leave her some money, but this evidence was not admitted. Almost all though had suffered from gout.

Evidence of colchicine poisoning was given by toxicologist Alfred Swaine Taylor, the defence being that the poison could not be reliably detected after so long. In summing up the judge said to the jury: “Gentlemen, if such a state of things as this were allowed to exist no living person could sit down to a meal in safety”.

Found guilty, and sentenced to hang, Catherine Wilson was hanged in front of a crowd of 20,000 outside the Old Bailey on 20th October 1862. It was to be the last public execution of a woman in London.

It was later speculated that Catherine Wilson was probably responsible for at least seven deaths by poisoning her victims with either colchicum or arsenic.

Theodore Coneys: The Dark Story of the Denver Spider Man

Jill Price – The Woman Who Can Remember Everything