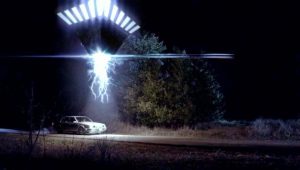 This famous UFO case dates back to 1980 but it is confirmation that the US government is back-engineering alien technology. Betty Cash, her daughter and grandson appear to simply be collateral damage.

December 29 1980 Betty Cash, Vickie Landrum and Colby Landrum (Vickie’s seven-year-old grandson) were driving home to Dayton, Texas. It was 9pm when a bright light in the trees above them forced them to stop the vehicle. They got out of the car to inspect, Vickie (a devout Christian) believing that it was the second coming of Jesus. They noticed the object omitting the light was shaped like a diamond before suddenly they were hit with an intense blast of heat. The mystery object then vanished leaving the women suffering severe radiation burns, nausea and diarrhoea. They would continue to suffer from the same symptoms, plus excruciating headaches, on the same date every year.

Vickie Landrum told Cash to stop the car, fearing they would be burned if they approached any closer. However, Vickie’s opinion of the object quickly changed: a born again Christian, she interpreted the object as a sign of the second coming of Jesus Christ, telling her grandson, “That’s Jesus. He will not hurt us.”

Anxious, Cash considered turning the car around, but abandoned this idea because the road was too narrow and she presumed the car would get stuck on the dirt shoulders, which were soft from that evening’s rains.

Cash and Landrum got out of the car to examine the object. Colby was terrified, however, and Vickie Landrum quickly returned to the car to comfort the frantic child. Cash remained outside the car, “mesmerized by the bizarre sight,” as Jerome Clark wrote. (Clark, 175) He went on,

The object, intensely bright and a dull metallic silver, was shaped like a huge upright diamond, about the size of the Dayton water tower, with its top and bottom cut off so that they were flat rather than pointed. Small blue lights ringed the center, and periodically over the next few minutes flames shot out of the bottom, flaring outward, creating the effect of a large cone. Every time the fire dissipated, the UFO floated a few feet downwards toward the road. But when the flames blasted out again, the object rose about the same distance.” (Clark, 175)

The witnesses said the heat was strong enough to make the car’s metal body painful to the touch—Cash said she had to use her coat to protect her hand from being burnt when she finally re-entered the car. When she touched the car’s dashboard, Vickie Landrum’s hand pressed into the softened vinyl, leaving an imprint that was evident weeks later. Investigators cited this handprint as proof of the witnesses’ account; however, no photograph of the alleged handprint exists. 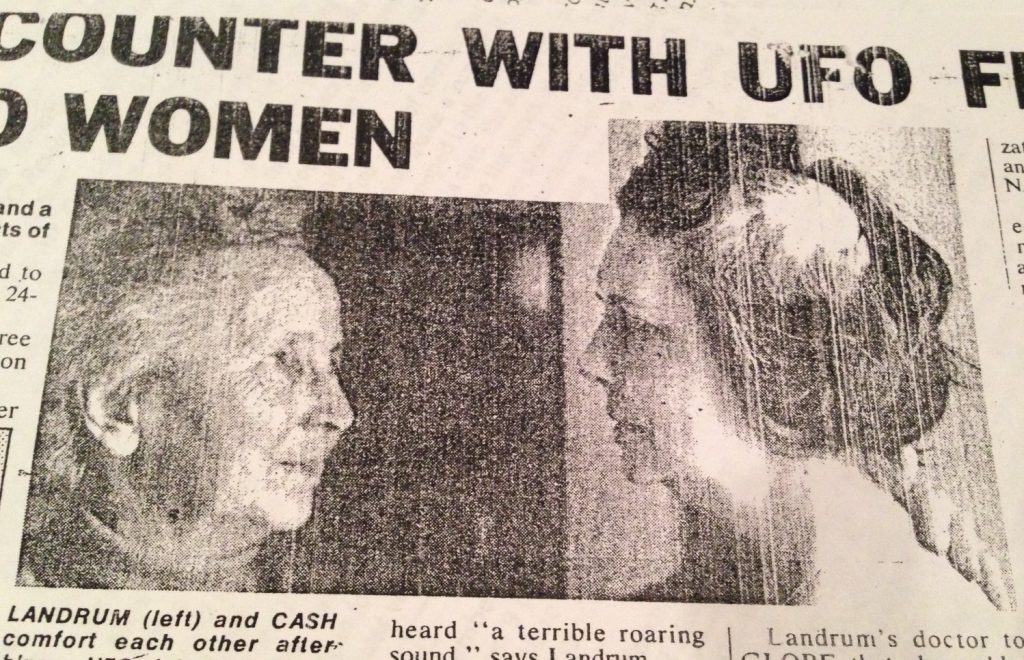 The object then moved to a point higher in the sky. As it ascended over the treetops, the witnesses claimed that a group of helicopters approached the object and surrounded it in tight formation. Cash and Landrum counted 23 helicopters, and later identified some of them as tandem-rotor CH-47 Chinooks used by military forces worldwide.
With the road now clear, Cash drove on, claiming to see glimpses of the object and the helicopters receding into the distance.

From first sighting the object to its departure, the witnesses said the encounter lasted about 20 minutes. Based on descriptions given in John F. Schuessler’s book about the incident, it appears that the observers were southbound on Texas state highway FM 1485/2100 when they claimed to have seen the object. The initial location of the reported object, based on the same descriptions, was just south of Inland Road,

Investigators later located a Dayton police officer, Detective Lamar Walker, and his wife who claimed to have seen 12 Chinook-type helicopters near the same area the Cash-Landrum event allegedly occurred and at roughly the same time. These other witnesses did not report seeing a large diamond-shaped object. Detective Walker investigated this incident but was misled on numerous occasions by high ranking military officials, including those reportedly from the Pentagon.

In 1981 Vickie Landrum appeared on That’s Incredible, a popular ABC television program. Vickie was hypnotized in front of a studio audience; under hypnosis she recounted the UFO incident. Vickie Landrum and Betty Cash both appeared on the 1989 U.S television special, UFO Cover Up? Live!, hosted by Mike Farrell. They related their account of the UFO encounter and their subsequent medical problems and legal battles. In 2009 Colby Landrum appeared on UFO Hunters: Alien Fallout.
Coincidentally, Betty Cash died at the age of 71 on December 29, 1998, exactly 18 years after her claimed close encounter.