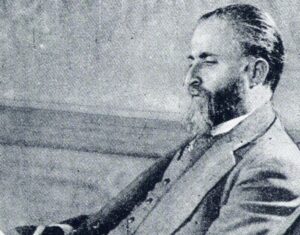 Carlos Mirabelli was born in 1889, Botucatu, São Paulo, Brazil, of Italian parents. He studied Spiritism at an early age and was introduced to the writings of Allan Kardec.

As a teenager he worked in a shoe shop and claimed to have experienced poltergeist activity where shoe boxes would literally fly off the shelves. He was placed in a lunatic asylum for observation and psychologists said there was something wrong with him, but he was not physically sick.

He had a very basic education and was known to be a very ‘simple’ man. Despite his humble beginnings, Carlos exhibited a remarkable array of talents. He could produce automatic handwriting, materializations of objects and people (ectoplasm), levitations and movement of objects.

To further confound his peers, some of the subjects he spoke on included medicine, sociology, politics, theology, psychology, history, astronomy, music, and literature – all subjects that would have been unheard of to a man with only a rudimentary education.

During his séances, he demonstrated writings in over 28 languages with an abnormal speed that others found nearly impossible to duplicate. In one documented case, Carlos wrote in hieroglyphics that to date, have still not been deciphered.

Carlos had other strange talents too. For one, he could levitate and appear and disappear at will. In séances, Carlos was known to levitate 3 feet above his chair. 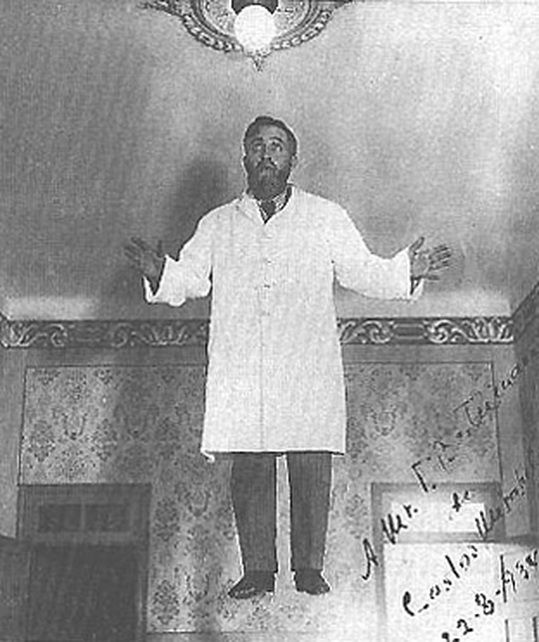 In one incident, Carlos was seen, by several witnesses, to instantly vanish at the da Luz railroad station. Witness reported several occasions where Carlos would vanish in one room and instantly appear in another.

In another documented occurrence, witnessed by Dr. Ganymede de Souza, a little girl materialized in a closed room in broad daylight. The doctor confirmed that the apparition was his daughter who had perished a few months earlier.

The doctor took the girl’s pulse, asked her personal questions, and took photographs of the incident.

The most amazing aspect of Mirabelli’s supernatural events was the number of witnesses present and the analysis of photographs and films that have subsequently been conducted.

In some instances up to 60 witnesses were present including 72 doctors, 12 engineers, 36 lawyers, and 25 military men. The President of Brazil once witnessed Mirabelli’s talents and immediately ordered an investigation.

In 1927, scientific assessments were conducted in a closed environment. Mirabelli was bound to a chair and examined before and after the tests. Tests were conducted outdoors or if conducted indoors, they were lit by bright lights. The tests resulted in over 350 “positives” and less than 60 “negatives”.

In one of the seances, after the room was filled with the odour of roses, a bishop, Camargo Barros, who had died only recently, materialized and was carefully examined by the doctor. During these events, Carlos was secured to his chair, in trance, and fully visible.

The bishop told the sitters to witness his dematerialization which duly occurred, after which the room was filled with the odour of roses again. Another instance of recognition was when a person materialized and was recognized as Prof. Ferreira who had recently died. He was examined by the doctor, and ‘a photograph was then taken after which the form became again cloudy and disappeared’.

During the seances, the investigators also noted the drastic changes in Carlos’s physical state, i.e. his temperature would vary, as would his pulse rate and respiration.

A further example that demonstrates the spontaneous nature of Carlos’s mediumship was the occurrence of the materialization of Dr de Menezes. On this occasion, a bell on the table levitated and began to ring in the air; Carlos awoke from trance and described a man whom he could see.

Suddenly a man, as described, materialized, and two sitters recognized him as de Menezes. When the doctor present attempted to examine the materialization, he fainted when the form decided to float away. Fodor refers to how, ‘the figure began to dissolve from the feet upwards, the bust and arms floating in the air’

In 1934 Theodore Besterman, a researcher with the Society for Psychical Research in London attended some of Mirabelli’s seances in Brazil. Upon his return he wrote a brief, private report claiming that Mirabelli was a fraud, but that report was never published. In his published report, he stated only that he had seen nothing extraordinary.

Reports of mediumistic phenomena continued throughout Mirabelli’s life. Given the general opinion today that apports and materializations do not occur except as magic tricks, it is difficult to believe that Mirabelli can escape broad charges of practicing legerdemain, however extraordinary some of his mental feats may have seemed.

Unfortunately, all of the positive reports came from people closely associated with him. Possibly because of the negative nature of the early reports, especially that of Besterman, no conclusive study was ever made.